May 05, 2017
A growing number of analyses of spatial scatter of GPS positions of animals (fixes) verify a fractal dimension (D) substantially smaller than what should be expected from standard models. Specifically, D tends to be close to 1, which reflects a very heterogeneous fix dispersion over a wide range of spatial resolutions. A recurring question among analysts of animal space use is thus: is this so-called scale-free pattern – statistically speaking – reflecting a matching heterogeneous habitat that happens to satisfy a self-similar dispersion (the “environmental forcing” explanation), or is the scale-free space use a manifestation of intrinsic, cognitive processes (the “emergent property” explanation)? In this post I illustrate the challenge by showing an analysis of large mammals' space use. 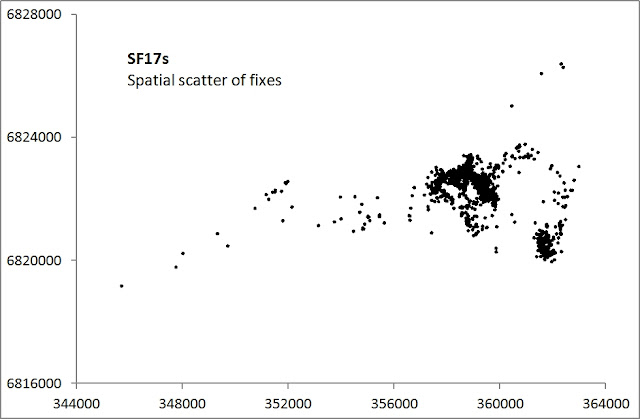 The image above, showing the spatial accumulation of fixes from GPS-sampling a red deer Cervus elaphus individual during the summer season illustrates this key question (see Gautestad et al. 2013 for details, where 52 individuals are included). As shown below, when counting number of fix-containing virtual grid cells at different spatial resolutions for respective individuals, the entire set of data covering all individuals showed D=1.18 on average. Due to the log-log linearity the pattern satisfies a statistical fractal. Two individuals with particularly large sample sizes illustrate that also the individual sets of fixes show close coherence with self-similarity (open symbols; both sets confirming linear regression slope on log-log scale). The actual analysis of the SF17s series – see scatter of fixes above – shows D=1.12 (red triangles). 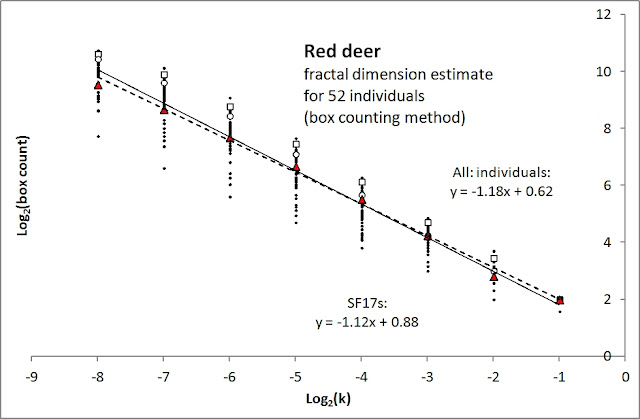 So far, the multi-faceted statistical scaling analysis of these red deer data (Gautestad et al. 2013) represents the broadest test of scale-free space use by terrestrial animals ever published. The pressing question is thus: is the scale-free space use formed by an environment that happens to be distributed in a fractal-compliant manner (“self-similar” heterogeneity), or does the pattern emerge as a by-product of scale-free habitat utilization? Three arguments support the latter interpretation, for logical reasons alone:

When it comes to red deer, the area that is embedded in the uppermost illustration obviously contain – for the most part – heterogeneous patches that are distributed somewhere on the gradient from good to bad. “Forbidden space”, like lakes, rivers, steep slopes, etc., neither dominates the home range nor show a scale-free D≈1 pattern.

To conclude from ecological reasoning alone, the D=1 pattern that was verified for the red deer should be considered an emerging property of intrinsic origin (multi-scaled cognitive processing) as this kind of behaviour is expressed by GPS-sampled space use through the season.

In our 2013 paper we went beyond the simple logical reasoning in 1-3 above by expanding the analysis with several complementary statistical approaches, which all supported the same conclusion. In statistical-mechanical terms, the pattern satisfied what is expected from Multi-scaled random walk (MRW) in the scaling cube.