Showing posts from August, 2017
Show All

The Lesser Kestrel: Natal Dispersal In Compliance With The MRW Model 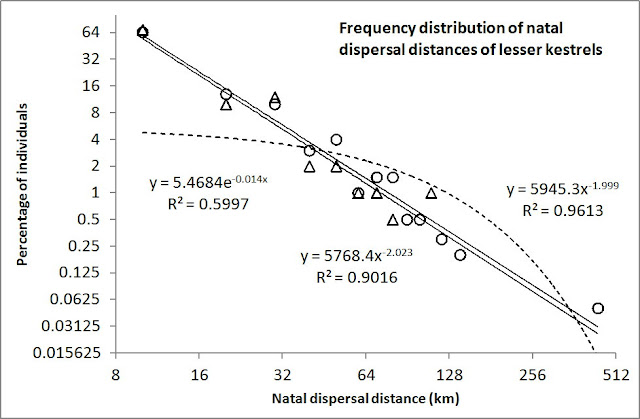 The Multi-scaled random walk (MRW) model defines a specific dispersal kernel for animal movement; a power law, which is qualitatively different from standard theory (a negative exponential function). Alcaide et al. (2009) analyzed long-term ringing programmes of the lesser kestrel Falco naumanni in Western Europe, and showed results from re-encounters of 1308 marked individuals in Spain. They found that most first-time breeders settled within 10 km from their natal colony (i.e., a strong philopatric tendency), with a negative association between natal dispersal and geographical distance. While Alcaide et al . (2009) were mainly concerned with gene flow and population effects, here I take a deeper look at their dispersal data and find strong support for MRW-compliant behaviour in the natal dispersal data. Indirectly, this pattern at the individual level also supports the MRW-analogue at the population level, the Zoomer model (Gautestad 2015). I allow myself to copy their Figure 1, s
Read more 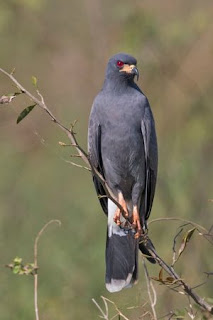 The theoretical framework of the traditional space use models (“the Paradigm”) shows strong mathematical coherence between individual movement and its population level representation. Basically (in its simplest and most parsimonious form), standard random walk representing individual statistics is compliant with standard diffusion representing population statistics. Further, the trunk of the toolbox of statistical methods in space use ecology is also resting on assumptions from the Paradigm. However, the Paradigm and its large family of sophisticated sub-models is now under increasing attack from many directions – directly or indirectly – due to the growing pool of empirical results that cast doubt on its common, core assumptions. For example, recent analyses of the snail kite Rostrhamus sociabilis plumbeus in Florida indicate that individuals of this dietary specialist show a surprising capacity to rapidly adapting to changing conditions over a large range of spatial scales from loca
Read more

Patch Use by Bison in Canada: Memory and Habitat Exploration

Merkle et al. (2014; 2017) have developed and tested a sophisticated memory-including patch selection model for free-ranging bison ( Bison bison ). Some of the empirical results add support to the Multi-scaled Random Walk (MRW) model (Gautestad and Mysterud 1995, 2005; Gautestad 2015), while other aspects require further details of the bison data to evaluate the potential for full compliance. In Merkle et al .’s simulation model; which is described by both a Lagrangian and a quasi-Eulerian variant (integro-difference equation, leading to similar results), animals use spatial and attribute memory to choose food patches based on three components: whether or not they have previously visited them, their reference point of patch profitability derived from recent foraging experience, and their memory of the profitability of each previously visited patch. First, the results confirm home range as an emergent property of spatial memory. Animals returning to previously visited patches wit
Read more
More posts