Showing posts from August, 2019
Show All

On the Paradox of Mechanistic Movement Models 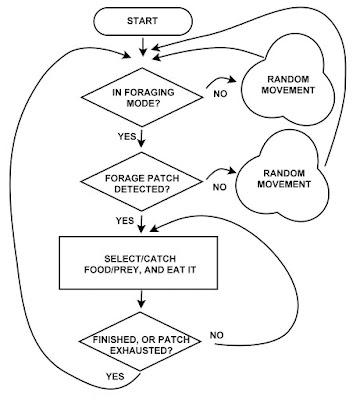 Mechanistic design is still dominating animal space use modelling. As the readers of my papers, book and blog have understood I’m very critical to this framework. In particular, because both mechanics and standard statistical mechanics – due to their dependence on Markovian dynamics seem to be unable to implement memory-influenced movement in a realistic manner. Thus, paradoxes abound. Unfortunately most theoreticians in movement ecology either do not care or do not know how to approach this issue. In this post I seek to pinpoint the most basic challenge, and how it may be potentially resolved by exploring a qualitatively new direction of modelling. Consider the standard, simplified illustration of animal foraging, which takes up much of an individual’s focus during a day. At each time increment the behaviour adheres to rules under the mathematical framework of a low order Markovian process. A similar diagram could have been shown for other behavioural modes; like looking for a mat
Read more
More posts