November 08, 2017
In light of the recent insight that individuals of a population generally seem to utilize their environment in a multi-scaled and even scale-free manner, the metapopulation concept needs a critical evaluation. Even more so, since many animals under a broad range of ecological conditions are simultaneously mixing scale-free space use with memory map-based site fidelity. In fact, both properties, multi-scaled movement and targeted return events to previous locations, undermine key assumptions of the metapopulation concept.

Levins (1969) model of “populations of populations” – termed metapopulation – rattled many corners of theoretical and applied ecology, despite previous knowledge of the concept from the groundbreaking research by Huffaker (1958) and others (Darwin, Gause, etc.). Since then, Ilkka Hanski (1999) and others have produced broad theoretical and empirical research on the metapopulation concept.

The Levins model describes a metapopulation in a spatially implicit manner, where close and more distant sub-populations are assumed to have same degree of connectivity. Later models (including Hanski’s work) made the dynamics spatially explicit. Hence, distant sub-populations are in this class of design more closely connected dynamically than more distant populations. Sub-populations (or “local” populations) are demarcated by large difference in internal individual mixing during a reproduction cycle relative to the rate of mixing with neighbouring sub-populations at this temporal scale. As a rule-of-thumb, the migration rate between neighbour populations during a reproduction cycle should be smaller than 10-15% to classify the system as a metapopulation. Simultaneously, intrinsic mixing during a cycle in a given sub-population is assumed to approximate 100%; i.e., “full spatial mixing” (spatial homogenization when averaging individual locations over a generation period). 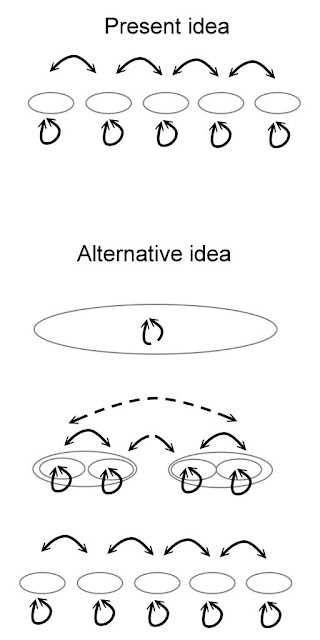 According to the prevailing metapopulation concept, high rate of internal mixing in sub-populations is contrasted by substantially lower mixing rate between sub-populations. The alternative view – advocated here – is a hierarchical superposition of mixing rates if the individual-level movement is scale-free over a broad scale range. The hierarchy is indicated by three levels, with successively reduced intra- and inter-population mixing rate towards higher levels.

The spatially explicit model of a metapopulation is traditionally based on three core assumptions:
In my alternative idea for a spatially (and temporally) structured kind of population dynamics, individual movement is assumed to comply with multi-scaled random walk (MRW). Contrary to a classical Brownian motion and diffusion-like process, MRW defines both a scale-free kind of movement and a degree of targeted returns to previous locations. Thus, both emigration and immigration may be implicitly deterministic. The two perceptions of a structured population are conceptualized in the present illustrations. “Present idea” regards the prevailing metapopulation concept, and the “Alternative idea” regards population dynamics under the MRW assumptions. 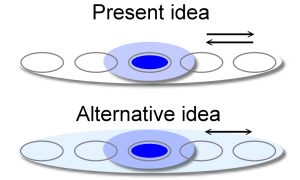 The upper part of the illustration to the right shows the two classical metapopulation assumptions in a simplistic manner. Shades of blue regards strength of inter-population mixing, which basically is reaching neighbour populations only (by a rate of less than 10-15%, to satisfy a metapopulation structure) but not more distant ones. For example, inter-generation dispersal rate between next-closest sub-populations is expected to be less than (10%)*(10%) = 1%, and falls further towards zero at longer distances. The Alternative idea at the lower part describes a more leptocurtic (long-tailed) dispersal kernel – in compliance with a power law (scale-free dispersal) – rather than an exponentially declining kernel (scale-specific dispersal), as in the standard metapopulation representation. Separate arrows for immigration from one sub-population to a neighbour population of the “Present idea” part illustrates the standard diffusion principle, while the single dual-pointing arrow of the “Alternative idea” illustrates that immigration an emigration are not independent processes, due to spatial memory-dependent return events. The emergent property of targeted returns connects even distant sub-populations in a partly deterministic manner.

The Alternative idea design is termed the Zoomer model, which is explored both theoretically and by preliminary simulations in my book. A summary was presented in a previous post (search Archive). A long-tailed dispersal kernel may embed and connect subpopulations that are separated by a substantial width of matrix habitat. Since the tail is thin (only a small part of individual displacements are reaching these distances), long-distance moves and directed returns happen with a small rate.

The Zoomer model as an alternative to the classical metapopulation concept has far-reaching implications for population dynamical modelling and ecological interpretation. For example, the property that two distant sub-populations may sometimes be closer connected than connectivity to intermediate sub-populations due to emergence of a complex network structure at the individual level was illustrated by my interpretation of the Florida snail kite research (see this post). At the individual level, research on Fowler’s toad (see this post) and the Canadian bison (see this post) shows how distant foraging patches may be closer connected than some intermediate patches. Also this is in compliance with the Zoomer concept and in opposition to the classical metapopulation concept. In many posts I’ve shown examples of the leptocurtic distribution of an individual’s histogram of displacement lengths, covering very long distances in the tail part – potentially well into the typical scale regime of a metapopulation (for example, the lesser kestrel; seach Archive).