Positive and Negative Feedback Part I: Individual Space use

June 23, 2018
The standard theories on animal space use rest on some shaky behavioural assumptions, as elaborated on in my papers, in my book and here in my blog. One of these assumptions regards the assumed lack of influence of positive feedback, in particular the self-reinforcing effect that emerge when individuals are moving around with a cognitive capacity for both temporal and spatial memory utilization. The common ecological methods to study individual habitat use; like the utilization distribution (a kernel density distribution with isopleth demarcations), use/availability analysis, and so on, explicitly build on statistical theory that not only disregards such positive feedback, but in fact requires that this emergent property is not influencing the system under scrutiny.

Unfortunately, most memory-enhanced numerical models to simulate space use are rigged to comply with negative rather than positive feedback effects. For example, the model animal successively stores its local experience with habitat attributes while traversing the environment, and it uses this insight in the sequential calculation of how long to stay in the current location and when to seek to re-visit some particularly rewarding patches (Börger et al. 2008, van Moorter et al. 2009, Spencer 2012, Fronhofer et al. 2013; Nabe-Nielsen et al. 2013). In other words, the background melody is still to maintain compliance with the marginal value theorem (Charnov 1976) and the ideal free distribution dogma, which both are negative feedback processes and not a self-reinforcing process that tends to counteract such a tendency.

Negative feedback (or balancing feedback) occurs when some function of the output of a system, process, or mechanism is fed back in a manner that tends to reduce the fluctuations in the output, whether caused by changes in the input or by other disturbances. Whereas positive feedback tends to lead to instability via exponential growth, oscillation or chaotic behavior, negative feedback generally promotes stability. Negative feedback tends to promote a settling to equilibrium, and reduces the effects of perturbations. Negative feedback loops in which just the right amount of correction is applied with optimum timing can be very stable, accurate, and responsive. https://en.wikipedia.org/wiki/Negative_feedback 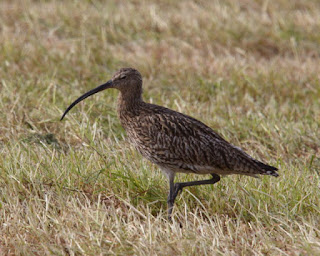 Picture: A common curlew Numenius arquata foraging on a field within its summer home range. Anecdotally, one may observe that a specific individual tends to revisit not only specific fields while foraging, but also specific parts of these fields. If this site fidelity is influenced by a rising tendency to prefer familiar space on expense of revisiting potentially equally rewarding patches based on previous visits, a positive feedback (self-reinforcing space use) has emerged. This effect then interferes with the traditional ecological factors, like selection based on habitat heterogeneity, in a complex manner. Photo: AOG.

The above definitions follow the usual path to explain negative feedback as “good”, and positive feedback as something scary (I will return to this misconception in a later post in this series). It echoes the prevailing “Balance of nature” philosophy of ecology, which I’ve criticized at several occasions (see, for example, this post).

In a previous post, “Home Range as an Emergent Property“, I described how memory map utilization under specific ecological conditions may lead to a self-reinforcing re-visitation of previously visited locations (Gautestad and Mysterud 2006, 2010); in other words, a positive feedback mechanism*. Contemporary research on animal movement covering a wide range of taxa, scales, and ecological conditions continues to verify site fidelity as a key property of animal space use.

I use a literature search to test an assumption of the ideal models that has become widespread in habitat selection theory: that animals behave without regard for site familiarity. I find little support for such “familiarity blindness” in vertebrates.
Piper 2011, p1329.

Obviously, in the context of spatial memory and site fidelity it should be an important theme for research to explore to what extent and under which conditions negative and positive feedback mechanisms are shaping animal space use.

Positive feedback from site fidelity will fundamentally influence analysis of space use. For example, two patches with a priori similar ecological properties may end up being utilized with a disproportionate frequency due to initial chance effects regarding which patch happened to gain familiarity first**. Further, if the animal is utilizing the habitat in a multi-scaled manner (which is easy to test using my MRW-based methods), this grand error factor in a standard use/availability analysis cannot be expected to be statistically hidden by just studying the habitat at a coarser spatial resolution within the home range.

Despite this theoretical-empirical insight, the large majority of wildlife ecologists still tend to use classic methods resting on the negative feedback paradigm to study various aspects of space use. The rationale can be described by two end-points on a continuum: either one ignores the effect from self-reinforcing space use (assuming/hoping that the effect does not significantly influence the result), or one use these classic methods while holding one’s nose.

The latter category is accepting the prevailing methods’ basic shortcomings – either based on field experience or inspired by reading about alternative theories and methods – but the strong force from conformity in the research community is hindering bold steps out of the comfort zone. Hence, the paradigm prevails. Again I can’t resist referring to a previous post, “Why W. H. Burt is Now Hampering Progress in Modern Home Range Analysis“. v Within the prevailing modelling paradigm, implementing spatial memory utilization in combination with positive feedback-compliant site fidelity is a mathematical and statistical nightmare – if at all possible. However, as a reader of this blog you are at least fully aware of the fact that some numeric models have been developed lately, ouside the prevailing paradigm. These approaches not only account for memory map utilization but also embed the process of positive feedback in a scale-free manner (I refer to our papers and to my book for model details; see also Boyer et al. 2012).

** In Gautestad and Mysterud (2010) I described this aspect as the distance from centre-effect; i.e., the utilization distribution falls off at the periphery of ulilized patches independently of a similar degradation of preferred habitat.

Börger, L., B. Dalziel, and J. Fryxell. 2008. Are there general mechanisms of animal home range behaviour? A review and prospects for future research. Ecology Letters 11:637-650.

Gautestad, A. O., and I. Mysterud. 2006. Complex animal distribution and abundance from memory-dependent kinetics. Ecological Complexity 3:44-55.