October 15, 2018
There is no doubt among field ecologists that animals from a broad range of taxa and over wide range of ecological conditions utilize their environment in a spatial memory-influenced manner. Spatial map utilization have now been verified also well beyond vertebrates, like dragonflies and some solitary wasps. To me at least it is thus a mystery why theoretical models that are void of influence from a memory map; for example ARS, Lévy walk and CTRW (see Part I, II), are still dominating ecological research with mostly no critical questions asked about their feasibility.

It is a fact that the memory-less mainstream models all have a premise that the data should not be influenced by map-dependent site fidelity. In other words, applying ARS, Lévy walk and CTRW models as stochastic representation of space use also implies accepting that the animal’s path is self-crossing by chance only, and not influenced by targeted returns. Such returns can be expected to seriously disrupt results on – for example – habitat selection, since self-reinforcing patch utilization (positive feedback) obviously becomes a serious issue for methods that are based on memory-less space use where revisits are statistically independent events.

Despite performing hypothesis tests on data that obviously contradicts this hidden assumption about lack of spatial memory influence, for example movement in a home range context (where the home range is an emergent property from such returns), memory-less models are applied by cultural instinct or a misconception that alternatives do not exist. “Everybody else is using these standard models, so why not me?”

This attitude obviously hinders space use-related ecological research on its path towards becoming hard science at the level we are used to find in physics, chemistry and geology; i.e., models with strong predictive power. The laid-back excuse that animal ecology is not only more complicated but also basically more complex does not hold anymore. Biophysical research, for example based on inspiration from – or developed in compliance with – my parsimonious MRW model (Song et al. 2010; Boyer et al. 2012; Boyer and Solis-Salas 2014; Mercado-Vásquez and Boyer 2018), show how even complex space use systems may now be treated analytically with success.

So far, there still exists only one book (Gautestad 2015) that is dedicated to criticizing the sloppy culture of model selection in ecological research. The statistical errors that follow from ignoring the frequently violated assumption about memory-less space use are percolating both my book and my blog*.

MRW implements a combination of scale-free space use with memory-dependent, occasional returns to previous sites in accordance to the parallel processing conjecture. The average return interval tret to a previously visited location relative to the sampling interval tobs, ρ = tret/tobs, will lead to different analytical results a a function of ρ.

This important ratio defines how the observed distribution of step lengths is a function of memory-influenced movement that complies with the MRW formulation: a mixture of scale-free exploratory steps and occasional returns to a previous location. I cite from Part II:

If the animal in question is utilizing spatial memory a lot of confusion, paradoxes and controversy may thus appear if the same data are analyzed on the basis of erroneously applying memory-less models within different regimes of ρ!

For example, an decreasing tret for a given tobs implies stronger site fidelity. The variable observer effect that is expressed by tobs becomes apparent within a quite wide transition range around tobs ≈ tret. For example, a Brownian motion-like form of the step length distribution may erroneously be found if ρ << 1, and a power law form can be expected when ρ >> 1, with truncated power law to be observed in-between. However, power law compliance may arise both in scale-free but spatially memory-less behaviour (Lévy walk) and MRW when ρ >> 1. Recall that MRW implies a combination of spatially memory-influenced and Lévy walk-like kind of movement in statistical terms. 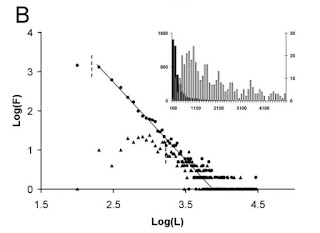 The step length distributions to the right (Gautestad and I. Mysterud 2005) illustrates from MRW-simulated data the effect on changing the ratio ρ >> 1 towards ρ < 1 apparently makes the step length distribution shape-shifting from a power law (apparently Lévy) to a negative exponential (apparently Brownian). This paradoxical pattern appears simply from changing sampling frequency of a given series of successive relocations. As observation frequency becomes larger than the return frequency the paradox appears from comparing the expectation from erroneous of model based on the memory-less space use assumption; i.e., Brownian motion vs. Lévy walk. 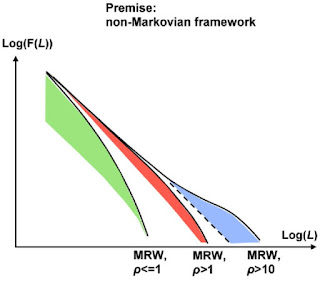 The Figure to the right (Gautestad and A. Mysterud 2013) illustrates the same transition more graphically. The hump (blue colour) that is observed for for ρ = 10 towards the extreme tail of the distribution, leading to a hump-like “hockey stick” pattern, becomes almost invisible at ρ = 100 Appendix 1 in Gautestad and A. Mysterud, 2013; see also Gautestad 2012). This gradual appearance/disappearance of the hockey stick as a function of ρ >> 1 illustrates the pseudo-LW aspect of MRW. By the way, such a “hump” on the tail part of a power law distribution has in fact been found and commented in several analyses of empirical data. Citing from Gautestad and A. Mysterud (2013):

It is interesting that one of the main issues raised in this respect regards the “problematic” occasional over-representation of very long step lengths even relative to an ideal Lévy walk distribution, invoking the term “Lévy walk-like” search (Sims and Humphries 2012; Sims et al. 2012). This “hump” in the long tail part of the distribution has been hypothesized to emerge from some kind of environmental forcing (Sims and Humphries 2012). However, here we have shown (Figure 3) that a similar hump – called a hockey stick – is in fact expected by default if MRW-compliant data are analysed within a specific range of the ratio between return events and observation interval. Gautestad and Mysterud 2013, p14.

The take-home message from these two examples is stressing the importance of testing for spatial memory before choosing which statistical model(s) to apply for a specific analysis.

*) In my research I also criticize memory-implementing models where spatial utilization beyond the individual’s current perceptual field builds on a mechanistic (Markov-compliant) kind of information processing. Consequently, in the Scaling cube (search Archive), these Markov models are located in the lower right corner (MemRW), in contrast to the “parallel processing”-based MRW, which you find in the upper right corner. In Gautestad et al. (2013) we tested these alternative model classes on red deer Cervus elaphus, and found strong support for the MRW framework. The red deer moved both in compliance with a scale-free space utilization, in parallel with site fidelity from targeted returns in a manner which supported parallel processing. Additional research has also given support to to MRW lately; for example see Merkle et al. (2014), who tested a set of contemporary hypotheses on memory-influenced movement in free-ranging bison Bison bison and found support for a central premise of MRW in the summer ranges of this species.

Boyer, D. and C. Solis-Salas. 2014. Random walks with preferential relocations to places visited in the past and their application to biology. arXiv 1403.6069v1:1-5.