January 20, 2019
The devil is in the details. The Multi-scaled Random Walk (MRW) model is merging scale-free habitat exploration with occasional returns to previously visited locations. Both components are by default expressed by stochastic rules. How can random returns be justified as realistic in a heterogeneous environment – where some localities are expected to experience a higher return frequency than others?

MRW regards a mixture of scale-free exploratory steps and targeted return events. The former kind of movement is modeled by a standard Lévy walk equation for random displacements with no directional bias. On the other hand, return targets are modeled as randomly chosen points in time where the animal revisits a previous location rather than performing yet another exploratory Lévy step. In other words, the animal is in this parsimonious (ground level) model formulation executing a mixture of scale-free moves and occasionally non-random self-crossing of its previous path. 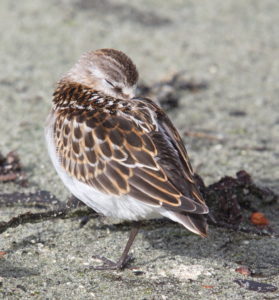 Picture: Little stint, Calidris minuta, taking a nap while considering what to do next. Photo: AOG.

By default such self-crossings – strategic returns – are in the basic simulations picked randomly and at a chosen average frequency among the entire series of previous locations. Consequently, the only bias towards site preference that gradually build up is the effect from self-reinforcing space use: if a site by chance has been targeted twice in the past, it has a twice as large probability to receive yet another visit, relative to another location with only one visit. Before considering the concept of “randomness”, let’s focus on this question: how can this model design, which intrinsically reflects movement in a homogeneous environment, be considered realistic, given that the animal’s environment typically is strongly heterogeneous in both time and space?

Randomly picked return targets are easy to imagine in a homogeneous environment. However, simple statistical logic may justify such random picking also in a more realistic scenario with heterogeneous distribution of various resource patches and no-go zones. In particular, two home ranges in a homogeneous versus a heterogeneous environment may show a similar average characteristic scale of space use (CSSU) when the full set of relocations (e.g., GPS fixes) are considered, given that the average environmental conditions are similar for the two sets, respectively. In short, in this case the two data sets is expected to show similar magnitudes of the parameters in the Home range ghost equation, I(N) = cNz, where c expresses the CSSU and 1/c is the intensity of space use*. The heterogeneity with respect to locally varying intensity of space use within a home range will surface only if one studies local or more short term conditions; for example, by splitting the data into spatial or temporal sub-sets. Influence of locally or temporally variable influence on habitat selection is then expected to be reflected in the respective subsets’ variation of 1/c and z of the Home range ghost equation at the chosen intra-home range scale of analysis.

In this simulation scenario the intra-home range CSSU varies from large (I) to small (IV), reflecting a more intense space use in the latter section. Despite this intra-home range heterogenity of space use the average CSSU for the four sub-sets I-IV equals the CSSU that is found in the pooled set of relocations; i.e., at the home range scale. Note that calculation of CSSU from the home range ghost formula makes it independent of the number of actual relocations in each section. 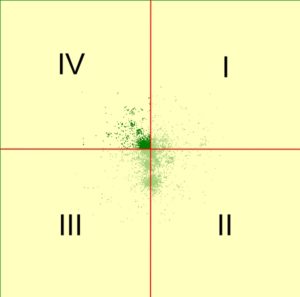 Hence, even if returns during the path sampling time are skewed towards some localities (on expense of other localities) due to preference based on habitat heterogeneity, this effect will be “averaged out” when considering the path as a whole. In other words, the basic model may reflect the over-all space use condition realistically, as seen from the scale of the home range. This aspect is thoroughly verified by simulations of MRW in homogeneous vs. heterogeneous environment (Gautestad, unpublished).

First, the property of random moves is simply a reflection of a sufficiently deep “hidden layer” to allow for a statistical-mechanical representation of movement and space use. Second, by zooming into subsections (space or time) of this over-all space use picture, the environmental heterogeneity may be revealed. Thus, the basic version of the MRW model for homogeneous habitat conditions my be feasible even in a heterogeneous habitat when studying the over-all conditions.

*) When calculating CSSU at different spatial scales, some trivial statistical-mechanical “tweaking” (rescaling) is performed to adjust for this difference.
Model assumptions - the individual level