May 14, 2019
Consider the following two system conditions and theoretical assumptions. First, a large nature reserve has a smaller periphery than several small ones with the same total area. Thus, all other factors equal, a smaller periphery pr. unit area of a large reserve implies a higher implicit survival rate for its embedded species. Fewer animals are “lost in space” due to accidentally diffusing out of their reserve. Consequently, a larger reserve is expected to have a proportionally larger species abundance of animals than a fragmented mosaic of smaller reserves, right? Second, again considering all other factors equal, distant reserves are functionally less connected. In other words, the population dynamics of two reserves in close proximity are assumed to be more in sync or anti-sync from intra-population dynamics than more distant ones, right? The conventional answers are obviously “yes”, but…

In my previous post I referred to empirical results on snail kite Rostrhamus sociabilis plumbeus in Florida (Reichert et al. 2016; Valle et al. 2017) that challenged the intuitive and unconditional “yes” answer to these two questions. Here I elaborate on this paradox of potential “no” answers, which may be resolved – as Reichert et al. (2016) and Valle et al. (2017) contributed to – by considering the network topology of the respective populations’ respective individuals.

Species with a cognitive capacity for spatial memory may require a novel modelling approach at all level of system abstraction; individual, population and community. The “lost in space” assumption becomes less valid, because individuals may return non-randomly even after long-lasting and distant exploratory moves. Returning individuals to a specific local site – steered to some extent by strategic spatial behaviour at the landscape scale – may represent a small number of all immigration events to this site. However, the accumulated effect on local population dynamics of such deterministic and occasionally long distance returns, when summed over the larger temporal scale of a reproductive cycle, should be expected to be profound. Individuals may take advantage of the extended knowledge of both local and distant conditions. Consequently, the SLOSS concept under conservation biology may require a theoretical rethinking.

Distance in space may to a smaller or larger degree be de-coupled from distance in network-topological terms. Supported by the Florida snail kite example, the difference in local population turnover within virtual sections of a given area may be expected to be less spatially correlated, and the functional effect from a variable distance between specific reserves becomes blurred. For example, if the red-rumped swallow this particular week in May (image below) just performed an occasional sally – albeit an extremely long one – followed by a memory-driven return to its original habitat, the two localities would have been drawn closer together in terms of network topological distance. 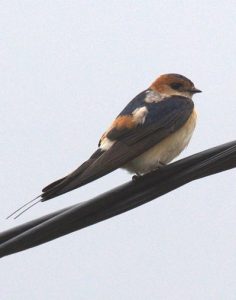 Lost in space or an example of an extremely long exploratory move? For a period of a few days in May 2017 this red-rumped swallow Cecropis daurica foraged together with a flock of local barn swallows in Ulsteinvik, Norway – a distance of about 2,500 km from the species’ ordinary habitat in the southern parts of Europe. Photo: AOG.

As a complementary view of this network theoretical aspect, the “anti-dispersal effect” from intraspecific cohesion (a tendency to counteract free dispersal and effectively gluing a population together, as modelled by my Zoomer model) cannot be mimicked within a traditional, Markovian/mechanistic framework. Without spatial memory at the individual level, there is no or little glue to keep the population together in the long run. Individuals are easily lost in space, whether they – for example – happen to disperse into the surrounding matrix environment from large or small reserves. On the other hand, a capacity for targeted, memory-driven returns obviously improves survival and thus fitness, whether the context is some large or several small reserves.

Recall from the Zoomer model for complex population dynamics that the influx of individuals to a given locality during a given interval may on average be equally distributed between short- and long distance immigrants (Gautestad 2015). This model property may sound counter-intuitive and paradoxical under the the traditional model architectures, unless one considers the premise of scale-free population flow during “zooming”. Statistically, a given individual in a distant location has a small probability of turning up at the given local site*. However, when summed over all individuals within this coarser spatial scale the migration rate becomes equal in magnitude to the probability from influx from more closely located individuals. Since number of individuals within a larger periphery are more numerous, their summed contribution to immigration to a finer-scale locality becomes equal to the immigration that originated from individuals more close-by. That is, given that individuals have shown equal weight to fine- and coarse-scale movement and space use on average (the default condition of both the MRW and the Zoomer models).

Targeted, goal-driven moves by individuals in the Zoomer model design drive the emergence of complex network topology of inter-population migration. Closely linked nodes in the network may be less dependent on physical distance between nodes (like reserves in a SLOSS context). This aspect, which has now found empirical support by studying multi-scaled individual movement’s effect on population redistribution, was illustrated by the snail kite papers that were reviewed in my previous post.

In other words, individuals, populations and communities in distant patches may be functionally connected in a manner that is inexplicable in classic metapopulation terms. A multi-scale kind of system analysis is necessary to understand both population dynamics and community ecology. Without it, paradoxes in local changes of population abundance may prevail and the predictive power of individual- and population level models in conservation ecology will remain low.

*) Under classic models such a probability for visitors from a distant site is practically zero, due to the premise of a diffusion compliant migration; i.e., an exponentially declining distribution of individual displacement lengths. On the other hand, under the Zoomer model this exponential equation is replaced by a power law tail, which is thin but very long (up to the cut-off scale).