September 13, 2019
In my previous post I summarized my critique of mechanistic modelling when applied on animal movement. Simply stated, the Markovian design on which mechanistic models depend is in my view incompatible with a realistic representation of memory-influenced and scale-free space use. Below I illustrate the alternative approach, non-mechanistic dynamics, by a simple Figure. As conceptually described by the Scaling cube, an extra system dimension based on relative scale (“hierarchical scaling” of the dynamics), resolves the apparent paradox of non-mechanistic dynamics.

As a supplement to my book presentation I have published a series of posts on this theme, where its unfamiliar nature has been revealed in a piece-wise manner. In particular, you got a “rolling dice” perception of how non-mechanistic dynamics pays out as a special universality class:

The basic challenge regards how to model a process that consists of a mixture of short term tactics and longer time (coarser scale) strategic goals. Consider that the concept of “now” for a tactical response regards a temporally finer-grained event than “now” at the time scale for executing a more strategic event, which consequently takes place within a more “stretched” time frame relative to the tactical scale. Strategy is defined in a hierarchy theoretical manner; coarser scale strategy consequently invokes a constraint on finer scaled events (references in my book). For example, while an individual executes a strategic change of state like starting a relatively large-distance displacement (towards a goal), finer-scaled events during this execution – consider shorter time goals – are processed freely but within the top-down constraint that they should not hinder the execution of the coarser goals. Hence, the degrees of process freedom increases with the scale distance between a given fine-scaled goal and a coarser-scaled goal.
From “The Inner Working of Parallel Processing” (blog post, February 8, 2019). 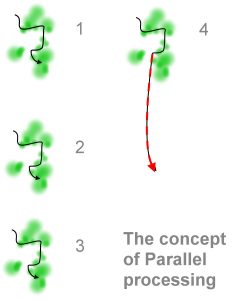 How to visualize non-mechanistic dynamics? Consider the output from a simple representation of a simulated animal path during a given time interval. The movement rules are constant and deterministic (but executed over a temporal scale range). Then consider repeating the simulation four times, marked by numbers in the image to the right. In compliance with classic design principles all repeat runs of the dynamics should be expected to show identical path progression over the habitat during the given interval. However, under non-mechanistic dynamics even a deterministic progression is expected to show occasional “surprise” moves (red line in run no 4).

Simply stated, what appears to be a surprising and random move from one time resolution (fine-scale “now”) may appear deterministic and quite rational from a coarser time resolution, in compliance with the rules for the simulation at these scales (coarser scale “now”).

Such unfamiliar and unconventional kind of model behaviour is expected to appear due to the fact that the path from the simulation is logged at a specific temporal scale (unit size time increments) while the dynamics are executed over a scale range, including coarser scales that the logged scale. Consequently and occasionally, the dynamics from parallel processing at coarser temporal scales will by necessity appear as stochastic surprise moves from the perspective of finer time scales.

For example, with reference to the “throwing dice” analogy (where number of eyes determine a specific state at the respective scale levels), most moves are executed at unit scale while some are executed at progressively coarser scales. The latter may be formulated as deterministic moves at respective temporal resolutions, but will appear randomly; i.e., as a surprise, when observed from finer scales. The dice represent discrete-scale description of levels, which of course should be considered a continuous range in a real system.

The crucial difference between mechanistic and non-mechanistic kind of stochastic moves is thus buried in the process itself; is the move a result of a classic Markovian rule that involves some influence of randomness in the decision making about what to do next, or is the move the result of a more strategic decision? To clarify this key issue one has to apply specific statistical methods that have the potential to test for parallel processing. The acid test of parallel processing is performed by comparing some basic statistical expectations from simulations of non-mechanistic dynamics with the similar statistics from real data. My papers, book and blog provide many results of such tests, spanning many aspects of the space use behaviour.
Model assumptions - the individual level Parallel processing