Parallel Processing: Towards a Broadened Biophysics of Space Use, Part I

October 26, 2019
This series of posts is an attempt to briefly summarize historically the conceptual development of the Parallel processing idea (PP) as a modelling framework to better understand the complex space use by animals. The endeavor started by a couple of enlightening Eureka moments, and swiftly split into two lines of approach. The challenge was to get the grips of the deeper process behind scale-free dispersion. This fascinating behaviour would in my view have to be coherently modelled along two lines of exploration, first from the perspective of spatio-temporal population dynamics and then from individual space use. PP was born during those early periods of confusion and frustration, and it has focused (some will say haunted) my research for more than 30 years. 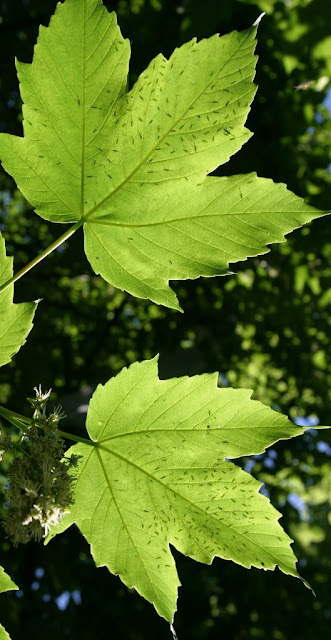 At the population side it all started out with a couple of frustrating years exploring mathematical models on animal population dynamics, trying to find a satisfactory road towards the very general phenomenon that animals tend to show aggregated abundance over a broad range of space and time scales, apparently driven by intrinsic behavior in addition trivial environmental forcing (Taylor 1961, 1986). However, even struggling with and tweaking of the flexibility of partial differential equations and spatially explicit coupled map lattice models did in my view not satisfy a proper reproduction of the inner working of animal dispersion processes at a very fundamental, parsimonious level. Hence, I had to put these attempts behind me, to seek an alternative approach towards a more realistic modelling framework.

Obviously to me at least, the spatio-temporal complexity of population dispersion had to be hidden inside the individuals’ brain, leading to the complex, scale-free statistical space use pattern as a so-called emergent property.

Around 1991 I finally stumbled into Kennedy and Crawley’s (1967) work on sycamore aphids Drepanosiphum platanoides. Here a phenomenon called “spaced-out gregariousness” was explained well by a specific behaviour at the scale of aphids in a petri dish*.

However, Taylor’s power law had shown the universality of gregarious, scale-free population abundance extending over broad scales in both space and time – and crucially – over a broad range of species, taxa and ecological conditions. How to get in touch with such a universal system behaviour in parsimonious model terms? As a first shot after the inspiration from aphids I developed an individual-based model including inter-individual interaction that was satisfactorily able to reproduce spaced-out gregariousness at the petri dish scale. However, the pattern broke down to standard (so-called mean field) statistics when the model output was coarse-grained to broader scales. In other words, a dead end with respect to realism. 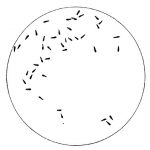 Right: A screenshot of aphid dispersion in a petri dish, from Kennedy and Crawley (1967).

Empiric data had to set the path forward. By luck, the campus at the University of Oslo had some easily accessible alleys of sycamore trees, containing a rich abundance of aphids. Thus, during the summer of 1991 I collected data on these aphids’ distribution over spatial scales from half-leaves to groups of leaves and so on, including how the abundance changed at various time scales during the season. The results were written up in an extensive series of drafts during 1992-1994**, but was not published – in an updated version*** – until my book appeared many years later (Gautestad 2015).

Interestingly, the simulations confirmed scale-free dispersion of aphids, in line with expectation of Taylor’s empirical foundation. But I went a step further, by studying how the pattern was influenced by distance between sample units. Strangely, the result was quite insensitive to this scale aspect, meaning that a group of leaves in close proximity showed similar scaling parameters as leaves that were more spaced-out. And the dispersion was strongly heterogeneous, not uniformly distributed.

For the critical relevance of this apparently metaphysical phenomenon in biophysical terms I refer to my book and to another post on this theme at my blog. In particular, the population level model I developed, the “Zoomer model” (search Archive), was able to reproduce not only power law dispersion over both space and time simultaneously, but also to link this property to another long lasting controversy in population fluctuations, called the Pink noise phenomenon in population abundance. In the period from February to April 2018 in this blog I presented a series of ten new analyses of various aspects of the Zoomer model properties. 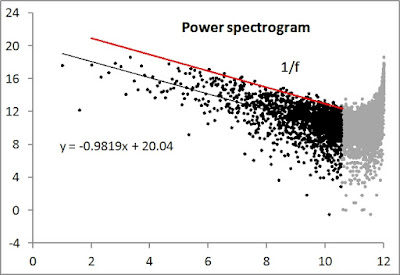 As far as I know this theoretical linking between two disparate aspects of complex population dynamics – Taylor’s power law and reddened (“1/f”) spectra in time series and spatial transects – were by the Zoomer model for the first time directly reproduced in simulations as showing two sides of the same statistical elephant!

Power spectrogram to the right: Both axes are log-transformed. (Search Archive: "Simulating populations IIX: time series and pink-noise"). By this a priori counter-intuitive empirical result from a biophysical perspective, the first seed for the development of the PP concept was also sown. According to the PP postulate, animals are moulding fine- and coarser scale behaviour into the actual process of animal movement and redistribution. In other words, PP regards how tactics and more strategic decisions play out cognitively in a temporally parallel fashion. Crucially, its mathematical foundation describes how this property can be tested against the standard framework of statistical mechanics (again, I refer to previous papers, book and previous blog posts.

Next steps in the endeavor: (a) switching towards the actual behaviour of animal space use at the individual level, and (b) broadening the empirical field to involve more species, taxa and ecological conditions. In short, an individual-based model for animal space use was needed, and it should from a system perspective be coherent with the novel structure of my Zoomer model for populations. The Multi-scaled random walk model (MRW) was in the pipeline! More on this in Part II.

*) For a simple introduction to the sycamore aphids’ behaviour, see this blog post by Ray Cannon.

**) I thank professor Stuart L. Pimm, who’s lab at the University of Tennessee I visited during the spring 1994, for his kind attempts to make my rather convoluted presentation both simpler and more accessible for the general ecologist. Unfortunately, the complexity of the model due to its quite unfamiliar biophysical concepts made it necessary to shelf the publication until a later time.

***) I’m forever thankful to professor Peter Yodzis (1943–2005, see obituary here: https://www.esa.org/history/obits/Yodzis_P.pdf) for our open-minded and inspirational discussions in 1996 on the mathematics of my new multi-scaled population dynamical model, the Zoomer model, during a workshop on “Scale Dependency of Ecological Patterns and Processes”, Tovetorp Research Station, University of Stockholm, Sweden.