The Beautiful Anatomy of a Home Range

December 26, 2015
In an upcoming paper I explore the intrinsic network topology of individual space use, under the premises of site fidelity and multi-scaled habitat use. In short – the process that leads to the emergence of a home range.

The illustration below provides a glimpse into this inner structure of nodes (re-visited locations), their respective statistical weight (how often they have been re-visited) and how they are inter-connected.

Inter-connectivity describes how some nodes are more closely linked (showing a higher frequency of inter-node commuting) than other nodes. Thus, the inter-node distance in these graphs are expressing the relative degree of connectivity, and not the actual spatial distance between the nodes. 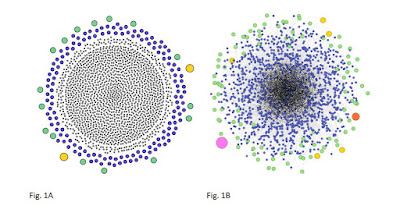 For example, two nodes that are close in topological terms – neighbour nodes in the graph to the left – may in fact happen to be distant in space. The most intriguing aspect of the two graphs above regards how the topology matures over time. In the early phase after the model individual has settled in an area, there is a relatively “shallow” hierarchy of revisited nodes (Figure 1A). In other words, most nodes are revisited once or just a few times. However, as time is progressing so is the scaling complexity of the network (Figure 1B).

Some nodes become dominant, and the “depth” of the hierarchical structure of revisited locations is increasing. The space use becomes more multi-scaled. In the paper I describe this beautiful process from several statistical–physical angles, and discuss some ecological implications. For example, while a deeper network topology of space use implies a more efficient habitat utilization and a more resilient home range – this maturity may also make the animal vulnerable to disturbance if the dominant node(s) are destroyed by surgical precision. Since this is a paper in prep. I cannot go into further details here. However, in the book I describe both the simulation model, and several implications of self-reinforcing use of patches that may emerge from site fidelity.