Random Returns Are Not Random

The statistical-mechanical universality class Multi-scaled random walk (MRW) is a relatively recent addition to the menagerie of various types of random walk (RW). It seeks to capture some key aspects of animal space use, in particular the combined effects of spatio-temporal memory and scale-free movement. In this post I put focus on the statistical property of return events to previously visited positions (memory-dependent site fidelity). How can such events feasibly and realistically be treated as random, knowing that the animal by targeted returns will tend to revisit more profitable patches with a higher probability than other locations? In particular, one specific aspect of the answer, revealed here in detail for the first time, will probably surprise you. Complexity turned into simplicity!

What regards the the transition from deterministic behaviour to a RW process in general terms, search my blog for "Markov", or you may for example look into Gautestad (2013). To place MRW in the context of other universality classes of RW, I refer to the Blog post "The Scaling Cube" (December 25, 2015).

MRW have some key properties that distinguishes it from other classes of RW; in particular 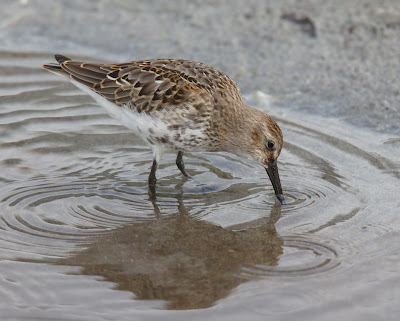 All four model properties are empirically testable. I refer to papers, book and various blog posts for examples of MRW support of these properties (including third party references covering a wide range of taxa). In sum, the MRW describes a statistical-mechanical movement process where the home range is an emergent property of Lévy-like exploratory movement, interrupted by occasional returns to previous locations along a path. However, how can deterministic returns to a specific subset of preferred sites (exemplified by the dunlin Calidris alpina to the left; photo by AOG) be realistically modelled as stochastic and uniformly distributed along the historic path?
In fact, as a first approach to this theoretical challenge the answer is logically simple.
Even if the return probability to each location on a path is constant, the increased statistical weight as a consequence of the positive feedback will over time create the emergent property of higher summed return probability to some sites on expense of others. In short, due to the spatial superposition effect as subset of 10 returns to a given local spot will have an increased probability by a factor of 10 relative to another spot with only one historic visit.
However, behavioural ecology of real site fidelity is of course more complicated than this description, but interestingly the simplified, parsimonious MRW model seems to capture real-world complexity of site fidelity in a surprisingly precise manner. How and why?
Before drilling further into the normal situation where some sites are actively and disproportionately selected for, consider the biophysical property of MRW space use intensity. In the MRW model the return probability is modelled as the ratio between return events and exploratory moves. Further, the observation intensity (the fix interval when collecting samples of a path) is crucial. Using a fixed observation interval of a path, tobs, the average return interval, tret is  related to the overall intensity of site fidelity during the given observation period and/or spatial arena. The ratio
ρ = tret/tobs
for a given tobs determines the magnitude of the Characteristic scale of space use, CSSU, relative to tret. A higher return frequency (larger 1/ρ) implies a smaller "balancing scale" CSSU (higher space use intensity) and thus a smaller parameter c in the default version of the home range ghost formula, I = c√N. In a nutshell, c translates to "space use pr. square root of sample size of spatial fixes, N". Hence, for a given magnitude of N at the chosen tobs, a small CSSU implies a more "intense" space use (more "clumped" dispersion of fixes) than a larger CSSU. Thus, this model property of context-specific c - resting on the premise of random returns with non-decaying probability -  has a great potential for ecological research!** Further, ρ < 1 (whether the numerator is reduced by the animal's behaviour or the denominator is sufficiently increased by the observer's sampling scheme) means transition towards serially non-autocorrelated sample of fixes.
What if the return probability to specific points along the historic path is increasing disproportionately relative to the standard MRW assumption of a priori equal weight pr. path location? Interestingly, such an effect is still embedded in the local CSSU for a given time period and region of the animal's space use!
Consider an example. In the extreme case where all returns to such a region go to a specific locality rather than being distributed in accordance to the standard rule (above) within the given region, the number of returns to this subset of the total path is still distributed somewhere within the region when seen from the spatial scale of this locality. Thus, the site fidelity ratio ρ should be expected to be equal! In other words, if the number of returns to a given intra-home range region is relatively high during the given sampling period (high intensity of use), the CSSU is expected to be smaller whether the internal distribution of return visits to specific sites within this region is disproportionately high or not.

This property is explicable in statistical-mechanical terms: by coarse-graining the spatial scale of a given path to the coarser level of an intra-home range region, the principle of a mean field approximation should be expected to apply. Even if the local process is non-homogeneous with respect to movement rules; i.e., non-proportional revisit-probability at the fine-grained scale of the given MRW path, the over-all pattern will "average-out" to become indistinguishable from a proportional return probability at this coarsened resolution of the region***. Thus, it makes sense to disregard spatially fine-grained non-proportional return preference from the perspective of CSSU, which regards a coarser-grained spatial attribute of space use relative to the fine-grained path itself.

Only if returns are disproportionately targeting the given region itself on expense of returns to other parts of the home range; i.e., by disregarding finer-grained intra-regional degree of disproportionate return intensity at the finer-grained path scale, the CSSU at the given regional scale will be affected. However, this is the key aspect of CSSU itself, which will vary in magnitude as a function of behavioural intensity of local habitat selection as it is observed at the chosen spatial scale and time window.

The statistical-mechanical concept of CSSU is consequently a central ecological expression of animal space use, given compliance with the MRW basics (first-level tests). The first follow-up approach is to calculate the CSSU magnitude at the over-all scale of the observed home range, averaging away local heterogeneity (second-level tests). Next, one could drill into analyses of local and/or temporal subsets of the data and study how CSSU turns out in these finer-masked situations (third level tests).

The MRW model has many interesting biophysical aspects, some already revealed and others still to be discovered, described and subsequently utilized in ecological research.

*) From behavioural-ecological arguments on should expect the return probability to specific sites to decline as a function of increased uncertainty of site profitability; e.g., due to increased environmental variability and unpredictability over space and time. However, under a broad range of conditions long term (long memory) site fidelity has been shown to rule animal behaviour. See for example Marchand et al. (2017):

"The assumption that toads returning to a previous refuge choose one at random may seem unrealistic. Yet it fits the data better than two alternative models we tested, where the probability of return and/or the choice of refuge were distance-dependent." Marchand et al. 2017, p 68.

I commented on this result in the blog post "Fowler’s Toads: the MRW Model Gains Additional Support" (July 21, 2017).

**) For a simulation example of varying c, over a given landscape, see for example this blog post "Scrutinizing the MRW Model: Random Returns (January 20, 2019)". For an empirical example where local CSSU has been calculated for a local population of red deer Cervus elaphus, see Gautestad and Mysterud (2013) and the blog post "Towards an Alternative Proxy for Space Use Intensity" (January 22, 2016).

***) The important mean field concept for modelling animal space use is explained and illustrated in my book. You can also look into a general Wikipedia description: https://en.wikipedia.org/wiki/Mean-field_theory