September 16, 2016
In my book and in several blog posts I have described in detail how a spatial scatter of GPS fixes can be analyzed to estimate the animal’s characteristic scale of space use (CSSU). The method is based on zooming the resolution of a virtual grid until the intercept log(c) ≈ 0 and the slope z ≈ 0.5 in the log-transformed home range ghost formula log[I(N)] = log(c) + z*log(N). Incidence, I, regards “box counting” of grid cells that embed at least one fix at the given resolution of the grid. In this post I present for the first time an alternative method to estimate CSSU.

Space use that is influenced by multi-scaled, spatial memory utilization tends to generate a GPS fix pattern from path sampling that is self-similar; i.e., the scatter is compliant with a statistical fractal with dimension D ≈ 1. Since D<<2, the dispersion is statistically non-stationary under change of sample size for its estimation (N). This property explains the home range ghost formula with the “paradoxical” N-dependency of observed space use, even for very large N. In a previous post I explained how this kind of multi-scaled space use in statistical-mechanical terms regards a combination of “inwards” and “outwards” space use in scaling terms. Thus, implicit in this property is a hypothesis of a balancing point between these two tendencies; the CSSU. Since the process is scale-free and CSSU is independent on N in the domain of serially non-autocorrelated fixes, it should be possible to find CSSU from the following simple method:
The following illustration, which is based on the serially non-autocorrelated set of simulated fixes in this post, shows the main points: 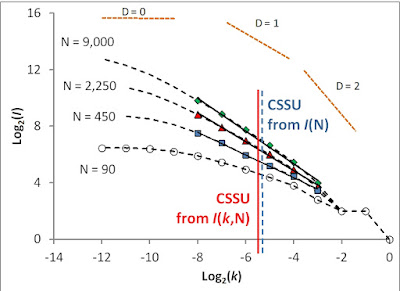 When applying the box counting method to estimate D one normally use the maximum sample size, in order to maximize the range of k for which the slope (and thus D and its scale range of stability) may be estimated. Above I have shown this procedure (using N = 9,000), but also added alternative regressions for smaller N (uniform subsampling of the total series). In this manner, the respective scores of I for a given k from varying N as in these samples indirectly reflects the previously described I(N) method; the “home range ghost” formula I(N) = cNz (zooming to the grid resolution where z≈0.5 and log(c)≈0, we find CSSU from this “unit” scale c ≈ 1).

The colour-filled symbols indicate the respective ranges of k where the regression slope for I(k) for the actual N is quite stable. Larger sample sizes show slope closer to -1, i.e., D≈1. The smallest sample, N=90, was – as expected – not able to resolve any fractal structure of the scatter of fixes. Observe how the range of k for which D is stable is widening with increasing N. In other words, the “dilution effect” (Gautestad and Mysterud, 1994) kicks in at finer resolutions (smaller k). Towards the other end of the range we see the “space fill effect”; i.e., all grid cells at coarse resolutions contain at least one fix (D=2).

These two properties; a log-linear stable slope over a given range of k and the different magnitude of I for a given k as sample size is changed, provides the link between the two approaches to estimate CSSU. First, the previously estimated CSSU for this series, indirectly based on the I(N) method, is shown by the blue vertical line (k=1:40 → log(k)=-5.32 scale units, including adjustment to the present arena size).

Next, the presently estimated CSSU using the new “midpoint of stable D” approach is shown by the vertical red line. Clearly, the two approaches lead to a similar magnitude of CSSU.