September 23, 2016
Linking the statistical pattern of space use to general models of movement behaviour has always been a cornerstone of animal ecology. However, over the last 10-20 years or so we have seen a rapidly growing interest in studying these processes more explicitly from a biophysical perspective. Biologists and physicists have come together on a common arena – movement ecology – seeking to resolve some key theoretical challenges. There is now a consensus that space use is more complex (in the physical sense of the word) than the traditional text book models have accounted for. In particular, individuals are generally utilizing their environment in a spatio-temporal multi-scaled manner, and species within a broad range of taxa also show capacity for spatially explicit memory utilization (e.g., a memory map). However, despite the emergence of very sophisticated models, movement ecology still has a long way to go to fully embrace these concepts and embed them into a coherent theoretical framework.

Somewhat provocatively, in my book I advocate that researchers in the wide-ranging and multi-dimensional field of animal space use need to be more willing to broaden their standard approaches with respect to statistical and dynamic models. Too much traditional thinking is hampering real progress in respective camps!

When all men think alike, no one thinks very much.
Walter Lippmann.


In movement ecology, “thinking alike” primarily regards three unfortunate facts:
Regarding this third issue, the statistical-mechanical framework for movement and space use has to be extended to reflect the broader framework of complexity, in a biophysical sense. In this post I have already described the Scaling cube, which is elaborated on in detail in my book and in a previous post (Archive: "The scaling cube", December 25, 2015). 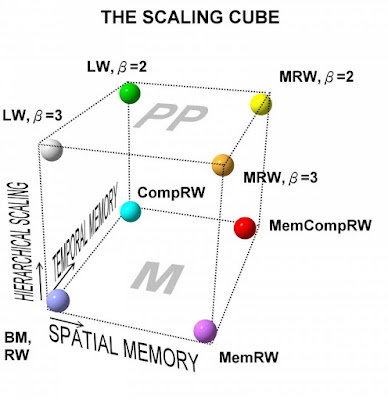 In this cube I unite eight universality classes of biophysical representation of space use, where the standard text book models belong to the lower left corner (Brownian motion and classic random walk/diffusion). This corner reflects dynamics and pattern from memory-less movement, both with respect to time and space (no memory effects). Currently, there is rapid theoretical development in some parts of the “Markov floor” (M) away from the text book corner, in particular towards the MemRW corner where model animals utilize a memory map in a mechanistic manner. There is also much activity going on around the upper left edge of the cube representing true Lévy walk (LW).

Referring the the Scaling cube, it should be obvious that Movement ecology is now ripe for embracing a stronger integrative approach. At present, research in the MemRW corner (whether theoretical modelling or empirical validation of these models) do not implement the temporal memory axis in their model constructions. In short, the animal’s next move is re-defined in a sequential manner, from one moment to the next. Similarly, the CompRW (composite random walk) camp – where the model animal’s next step either is temporally “fine-scaled” and tactical or more coarse-scaled and strategic (leading to larger displacements pr. unit time, on average) is primarily occupied with methods to differentiate this kind of sequential toggling of scale-specific movement at different time scales from real scale-free movement like Lévy walk (LW). I define the latter to belong to the parallel processing “ceiling” of the cube (PP), which consequently extends the Markov floor of mechanistic modelling to a three-dimensional space-time-scale system. Researchers in the LW camp are focusing on statistical methods to distinguish LW from spacific variants of CompRW, without considering the statistical-mechanically qualitative difference between the two processes. The PP dimension (hierarchical scaling) may contribute to resolving paradoxes and open paths towards novel statistical methods.

At present, my book and this blog are are the only sources describing and advocating such an integrative approach as expressed by the Scaling cube, and my Multi-scale random walk model (MRW) is the only approach that fully embraces all eight corners of the cube. The standard MRW is found in the upper right corner. By “tuning the model knobs”, MRW can be slid toward either of the other seven corners. In this manner, the MRW approach should offer a potential for resolving the three challenges for movement ecology, as outlined above.

One novel challenge, which emerge from studying the Scaling cube geometry, is the need to explore theoretically and empirically the qualitative difference between standard Lévy walk (no spatial memory, full temporal memory, hierarchically scale-free process) and the Lévy-like MRW process (full spatial memory, full temporal memory, hierarchically scale-free process). MRW is LW-like, but not LW. The first paper to test this qualitative difference on real animals’ space use, using my proposed protocols, is Gautestad et al. (2013). In this paper you also find links to the theoretical development of the respective methods. Follow-up elaborations on MRW, PP and other aspects of space use complexity are given in my book.

Such an integrative approach as outlined in the Scaling cube will require some bold steps by researchers in respective camps. I unfortunately ruined my career in ecology by stubbornly exploring the statistical-mechanical links between the eight corners of the Scaling cube over a period of more than 25 years. Younger and equally ambitious and challenge-seeking researchers will hopefully cope better, helped by the more broadened comfort zone of accepted directions of research now emerging from the present foundation of movement ecology. Good luck.