October 14, 2016
Interesting statistical properties of population dispersion emerge from the simulations of the Zoomer model (search Archive), which represents the population level variant of my Multi-scaled random walk model (MRW). The Zoomer model seems to offer a potential to cast new light on a particular scaling pattern, Taylor’s power law (Taylor 1961, 1986), which has been a nagging stone in the shoe for population ecology for more than 50 years. Taylor’s power law is one of the most widely tested empirical patterns in ecology and is the subject of an estimated thousand papers (Eisler et al. 2008)!

Despite this effort, a consensus to explain it has still not been obtained (Kendal and Jørgensen 2011). The scale-free pattern has been observed far beyond animal populations:

Taylor’s law is remarkable in that it is evident over the scale of a single chromosome (Kendal 2003, 2004) to the lungs of mice (Kendal and frost 1987), a farmer’s field (Kendal 2002), and upward to the breadth of the British Isles (Taylor and Taylor 1977). How the macroscopic fluctuations that characterize many of these observations might arise as a consequence of thermodynamic mechanisms is an intriguing question.
W. S. Kendal and B. Jørgensen, 2011.

In an ecological context, Taylor’s power law describes how variance (V) of population abundance (M) in a time series or over a spatial transect tends to comply empirically with V(M)=aMb, with b>>1 (in real population data b is typically close to 2, but sometimes even larger). In a spatial transect, the general mathematical modelling framework for population dispersion at fine scales predicts b≈1, which complies with a Poisson (“classically random”) distribution of individuals. In this framework b≈2 requires population sampling at relatively large scales. At these coarser scales local variability in growth rate may trivially lead to high degree of heterogeneous dispersion due to larger degree of local growth independence between neighbourhood sites at these scales (environmental stochasticity).

However, there are many empirical examples where population dispersion with b=2 has been observed also at fine spatial scales, in conflict with key model assumptions for local population mixing whether the environment is homogeneous or heterogeneous. In my book I describe these paradoxes in greater detail.

In addition to the b≈2 issue even towards finer spatial resolutions, one aspect of Taylor’s power law has by and large been ignored: first, the V(M) pattern unexpectedly emerges in a consistent manner with respect to constancy of b also when abundance is measured at different spatial resolutions within a given spatial extent (Taylor 1986). Larger spatial units (grain size) should intuitively lead to proportionally larger M on average. Second, and even more mysteriously, in my book I show by simulations and by empirical example that the respective “grains” do not need to be located side-by-side when lumped together to form larger scale analyses. The last nail in the coffin of intuition: appearance of the scaling law with b≈2 may appear even in spatially non-auto-correlated data. 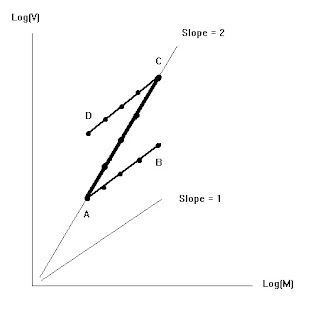 Figure 41 in my book (image to the right): Illustration of the Z-paradox in a diagram of logarithmically transformed sample variance (log(V)) as a function of logarithmically transformed mean number of animals (log(M)) pr. sample unit at a given grid resolution. Sufficient population mixing to satisfy ergodicity is assumed. M is then changed by changing grid resolution. For a random distribution of individuals in a homogeneous environment, log(V) = a*log(M) (slope =1 in the diagram, where the slope is represented by the exponent b in Taylor’s power law). In a heterogeneous environment variance for a given M is then typically larger; i.e. a larger a (for example, of magnitude described by the parallel shift from A to D in the illustration). This is expressed by the parameter a in Taylor’s power law (see main text), but b is unchanged upon such rescaling. Thus, by changing grain size for sample units in this manner, variance is still expected to change proportionally with this size, since M changes proportionally with grain size (say, from A to B or from D to C, or vice versa). If successive neighbourhood grid cells are not spatially correlated with respect to M, the line that is labelled “slope = 2” represents the Z-paradox, since variance is changing non-proportionally from A to C (or C to A) rather than the expected A to B (or C to D) under change of grid resolution.

In my book I describe this inter-scale constancy of b≈2 (spatial self-similarity) as the “Z-paradox”, and propose – with support from simulations using the zoomer model – that a parallel-processing kind of population kinetics may contribute to solve it. I also provide a pilot test on sycamore aphids Drepanosiphum platanoides, which shows compliance with predictions from the Zoomer model and thereby indirectly also with basic MRW model properties.

In some follow-up posts I will illustrate more aspects of this remarkable coherence between parallel processing-based population dynamics and single-individual dispersion of relocations (e.g., GPS series). I will also connect further dots from this novel framework for animal space use towards a proposal for a general theory of complex systems from a statistical-mechanical perspective.