December 04, 2016
The parallel processing concept (PP) is a core postulate of the Multiscaled random walk model. PP provides the backbone of an attempt to understand in a statistical-mechanically consistent manner why animal movement generally tend to show scale-free distribution of displacement lengths at a given frequency of GPS position sampling (Lévy walk-like movement). Contrary to standard Lévy walk theory, PP-based movement seems to offer a plausible explanation for why superlong displacements – the “long tail” part of the Lévy walk-like step length distribution – may appear even in environments with frequent direction-perturbing events. From standard theory such events should tend to “shorten the tail” by prematurely terminate long steps, and simultaneously inflate the frequency of shorter displacements. Thus, the standard Lévy model is – in my view – lacking some essential aspects of many animals’ cognitive computation of environmental conditions and the individual’s internal state.

In my book I have elaborated on PP from many angles, both from the individual and the population perspective. In this post I present a new attempt to squeeze the PP concept into a simple visual image. 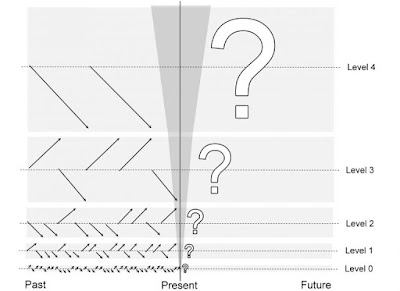 First, consider the lower dotted line, representing a timeline covering the past, present,and the future. Let the shaded area surrounding the timeline demarcate the potential movement distance from one moment to the next during the high-frequency time resolution at this “Level 0”. The series of arrows along the timeline represents in a simplistic manner movement to the left (upwards-pointing arrow) or to the right. It is trivial to expand space to higher dimensions, but let’s keep it simple. It is also trivial to expand the system with forward-pointing arrows for no movement during the given increment.

Next, consider that this series of left-right move distances during respective time increments are the result of completely deterministic behaviour, where the following move is the resultant decision based on present time conditions (a cognitive computation of factors from environmental input and internal state). In this manner, the vertical line marked “Present” slides towards the right as time goes by. As mentioned, the arrows along the timeline show the potential movement distance during a given increment in time. Since all arrows at the given timeline are equally long, it means that the series for simplicity either illustrates the average step length or the maximum length at this scale (constrained by limits on movement speed).

In a large series of steps that is explicitly executed in space by successively adding the arrows to create a path (in this example, back and forth on a one-dimensional line as the arrows on the Level 0 timeline are added as spatial vectors) this process will comply with statistics of a standard random walk – similar to Brownian motion – whether each movement decision is successively stochastic or deterministic or something in-between. Such statistics could for example be described by the step length distribution (net movement distance after N steps) or other classical aspects of such a path’s diffusion properties. The reason for Brownian motion compliance for the series in total, and thus a transition from a deterministic process at unit time scale to a stochastic process at the scale of several increments, is the fact that we defined the successive steps to be represented by independent movement decisions from one increment to the next; i.e., a Markovian (mechanistic) kind of dynamics.

In short, the illustration’s Level 0 when seen in isolation describes a Markovian; i.e., a mechanistic movement process. This implies that the next step’s direction – shown by a question mark – will depend on the animal’s evaluation of the present conditions at the specific time resolution for this level. At the next increment a new evaluation is taking place, and so on.

A Markovian/mechanistic model may include several time resolutions, but not more than one resolution at any given increment. For example, a so-called composite random walk may toggle stochastically or deterministically between shorter or longer periods of high- and long-frequency directional change of its path. In behavioural ecology this model is often called area-restricted search (ARS).

Expanding a mechanistic model to a non-mechanistic PP model implies that the cognitive process is postulated to involve a range of time resolutions, organized in a hierarchical design (whether animals actually adhere to this design is testable; see below). In the illustration above this temporal scale range is shown by several additional timelines, marked Level 1-4. The lines represent a geometric discretization of a continuous time range (logarithmic base 2 with levels 20, 21, 22, 23 and 24). Why log-linearity and why base 2? I have to refer to my book for these arguments.

The similar scaling of the spatial dimensions (wider “grey area” surrounding the higher-level timelines) is explained in "A statistical-mechanical perspective on site fidelity: part VI" (search Archive). The main effect from expanding the mechanistic model to a non-mechanistic PP model may – for example – be seen in the statistics of movement path that emerges from considering the steps from all levels in the illustration above; i.e., not ignoring the Level 1-4 timelines (or even larger levels if the PP scale range is enlarged). Steps at higher levels are the expected outcome from temporally coarser scale goals. From the perspective of a lower level, higher level goals will appear more strategic. Due to the geometric scaling (statistically speaking) of the frequency of steps from respective levels under the PP postulate, in the long run one should expect twice as many Level 3 displacements for every Level 4 displacement; twice as many Level 2 displacements for every Level 3 displacement, and so on.

Thus, the distribution of step lengths from PP complies with a power law – similar in some respect to a Lévy walk.

However, there are qualitative and testable differences between such scale-free space use by a Lévy walker and a PP walker. For example, the issue mentioned above with respect to Lévy walk and truncation of large displacements are under the PP model resolved for environments with frequent path disruptions from environmental conditions (see Figure 24 in my book).

As an extra twist of the non-standard statistical mechanical framework that accompanies PP, observe that in the illustration above I have widened the concept “Present” as we zoom from fine towards coarser time resolutions. Consequently, while mechanistic theory defines an event (like a movement decision) to take place at s given point in space at at given point in time, the PP framework defines the concept of “Now” i more broad terms. “Now” by necessity implies a coarser time resolution at higher levels.

This aspect is qualitatively incompatible with standard statistical mechanics. A PP-influenced kind of space use is in fact mathematically non-differentiable both from the Lagrangian and the Eulerian angle. Hence, paths and spatial utilization distributions comply with statistical fractals.

What is potentially achieved by switching away from the mechanistic framework?

The scaling cube (search Archive) visualizes how temporal memory (one of the premises for PP) may be expanded with spatial memory to create a model for multi-scaled space use that includes site fidelity (PP allows for emergence of a home range from non-mechanistic principles).