December 10, 2016
Data collection of individual movement like a series of GPS fixes provides a potential for a physical – a statistical-mechanical – interpretation of animal space use. Such material represents indirect studies of behaviour in contrast to direct observation and interpretation. The GPS pattern of dots on the map provides a coarse-grained image of how the individual in overall terms relocated itself during the period of sampling. It is fascinating that this “out of focus” image may in fact not only be scrutinized with respect to verifying many similar behavioural traits as traditionally studied by ethological methods, but also allows for interpretation of specific relationships that are difficult or outright impossible to test from the classic methods in behavioural ecology. In this post I’m focusing on one of these space use properties, scale-free habitat utilization.

First, what is “scale-free movement”? Statistically, this property apparently should be easy to verify (or falsify) by studying the binned distribution of displacements from one GPS location (fix) to the next in a large collection of such displacements. Since a scale-free distribution implies a power law (see below), it is expected to adhere to a linear relationship between log(F) and log(L), where F is the number of displacements of a given length L: log [F(L)] = α + β*log(L), where β ≈ -2 in many data sets [β is the power exponent and the parameter α sets the intercept with the log(F) axis].

However, as everybody working in the context of animal space use and movement ecology has experienced, in practice it is not that simple to verify scale-free movement. In fact, as time has gone by since this concept began to appear in journals in the 1990s (Viswantathan 1996) it has been repeatedly underscored that the step length distribution is extremely sensitive to a lot of conditions. For example, as verified by simple simulations a change of the sampling frequency when collecting fixes may turn an apparent scale-free distribution scale-specific (Gautestad and Mysterud 2013) and vice versa (Gautestad 2013).

Obviously, regardless of the level of sophistication of the statistical method and whether the distribution or some alternative approach is applied (e.g., MLE), to understand the issues and controversies progress depends on a deeper understanding of the actual space use process behind the statistical pattern. In other words, in the context of fix sampling a statistical mechanical approach is needed to interpret the pattern! From this approach the above referred sensitivity to sampling frequency is no longer an issue but what to be expected from specific classes of space use – in statistical-mechanical terms. Ignoring the respective biophysical models’ statistical expectations will create both confusion and controversy and thus hamper progress in ecological analysis of animal space use.

When analyzing large data sets it is easy to understand how relocations will tend to show successive displacement vectors that distribute themselves uniformly over 0-360 degrees. Further, well known statistical mechanical theory can explain why a scale-specific kind of space use will tend to show a step length distribution that confirms a negative exponential function (number of steps falling in range Li+1 = Li+d is p percent less frequent than number of steps in bin Li, where d is bin width). However, it is still quite murky how a power law pattern of steps is emerging from GPS fixes. Lévy walk is just one of many candidate models for the underlying process, and it has come under stronger scrutiny lately.

Scale-free movement is closely linked to the concept of more or less “equally distributed” space use over a range of scales (see for example this post). For example, for one particular slope β of the log [F(L)] distribution (β=-2), the animal is expected to distribute spatial displacements from short-, medium, and longer-term temporal goals relatively evenly over a scale range. By “evenly” it is understood that execution of a k times larger strategic event during exploratory movement is expected with frequency 1/k² (i.e., β=-2). In other words, the product of frequency of occurrence if a given step length and length scale L is constant over the scale range for scale-free space use (observe the equality of the two red triangles in the illustration below). In particular, when the data analysis reveals β=-2 the animal has in over-all terms shown inversely proportional use of the landscape at large spatial resolutions in two-dimensional space terms (L2) relative to finer resolutions (Gautestad 2005). 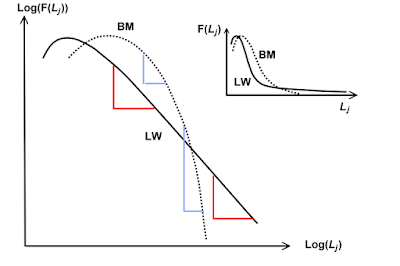 The illustration shows the property of a Lévy walk (LW), which is one of several classes of a scale-free movement, where a given increment of log(L) is expected to show a given decrease in log(occurrence) regardless of scale L. In the smaller inset – with standard arithmetic axes – the expectation from a scale-specific process, Brownian motion (BM), is also included for comparison to LW (see details in Gautestad and Mysterud 2013). Observe that the slope of the log-log distribution of step lengths become steeper with increasing L as shown by the blue triangles, verifying a scale-specific kind of space use (typically, a negative exponential distribution rather than a power law).

For ecology the main take-home message from the concept of scale-specific versus scale-free space use is...