February 22, 2017
In a previous post I introduced the empirically observed Taylor’s power law, by referring to some of its history and one of its paradoxical properties: population abundance typically seems to satisfy a very aggregated pattern, V = aMb with b≈2, which seems to be self-similar (satisfying a statistical fractal) over a wide range of spatial resolutions. I also hinted towards chapters of my book, where I describe and discuss this and other strange statistical aspects relative to expectation from traditional population-dynamical models. In this post I study how my Zoomer model for scale-free population dynamics behave with respect to compliance with Taylor’s power law if I parameter-tune it towards more standard assumptions. 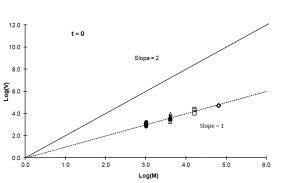 Consider the generic statistical pattern that would be expected from a “well mixed” population (satisfying, for example the default assumption for a standard differential or difference equation model). In this case, which by the way also makes the model population compliant with standard statistical mechanical principles in addition to well-behaved calculus, we expect b≈1 for the power exponent. In other words, log(V) is expected to vary linearly with log(M) with slope close to 1.

The coefficient a, which after transformation to log(a) describes the intercept with the log(V)-axis, will vary as a function of spatial heterogeneity that is experienced by the population. Strong heterogeneity implies large a in Taylor’s power law. So far, both the mathematical and the statistical-mechanical framework is “non-problematic”. 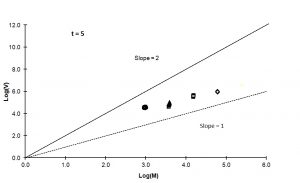 To the right I illustrate this behaviour by V(M) analysis of the Zoomer model ouput, where the population dynamics are tuned towards standard scale-specific behaviour. In this case, spatial heterogeneity is imposed in the form of conspecific attraction rather than standard “mean field”-compliant movement in a heterogeneous landscape (diffusion-like, see pp 136-137 in my book). Further, M represents average abundance from the perspective of different grid resolutions; i.e., a virtual grid is superimposed onto the spatial population dispersion and M is calculated along transects at several grid cell sizes (in this example, four spatial resolutions). Larger cell size implies larger M. 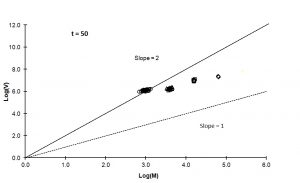 Initially (at t=0, upper illustration), the population is in a randomized dispersion mode. As time goes by, the conspecific attraction effect begins to influence the V(M) statistics, leading to a gradual increase in in the parameter a [consider a line through the plots, which will give an estimate of log(a) at log(M)=0]. In short, the individuals will gradually tend to congregate. Above and to the right I show the situation at t=5 and t=50. Observe that the slope b is quite stable and close to b=1 over the entire time range.

To conclude this part, in the context of Taylor’s power law the Zoomer model seems to capture well the standard statistical expectation under the premise of scale-specific behaviour at the individual level. Further, the population variance, V(M), behaves “classically” (trivially) by showing proportional increase of V with increasing cell size area over which abundance M is calculated.
Statistical mechanics - populations Statistical properties of populations