February 23, 2017
Taylor’s power law regards the statistical relationship between population variance and population abundance, V = aMb. I refer to Parts I–II for background information. Whether V(M) is studied at a given spatial resolution or from varying abundance M in a sample by changing grid resolution the still unresolved problem is that animal populations (covering a wide range of taxa) upon re-scaling tend to show b≈2. Typical range is 1.5<≈b<≈2.2 rather than b≈1. In other words, due to the power law structure population dispersion seems to be scale-invariant; also called self-similar and thus compliant with a statistical fractal (aggregations within aggregations within…). In this post, I illustrate how V(M) in the Zoomer model becomes compliant with real-life V(M) patterns when the model is parameter-tuned towards its default condition – scale-free population dynamics!

Many model proposals exist for V(M) when sampling at a given spatial resolution, but despite thousands of papers over a period of more than 50 years there is still no consensus to understand the law even from this standard perspective. The most frequent interpretation regards populations that are assumed to experiencing constant per capita environmental variability. In this case, and assuming weak density-dependent regulation, the regression of log(variance) versus log(mean abundance) should have a line with b≈2 (log-normal variability). However, this interpretation depends on a crucial assumption that the sample units of M are collected from local populations with relatively independent dynamics. If the total sample is collected from the same well-mixed population one should expect b≈1, not b≈2, which is frequently documented also for what should be classified as intra-population variance. Further, the log-normal distribution does not explain b≈2 from cross-scale sampling of abundance (as exemplified in the illustration above). From the perspective of traditional population modelling, Taylor’s power law represents a stone in the shoe. 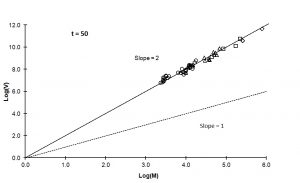 To the right: Zoomer model output with default (scale-free) intraspecific cohesion, uniformly distributed over the covered scale range. V(M) regards abundance sampling at four different spatial resolutions, where respective plots are superimposed into the same graph. The pattern confirms a scale-free population dispersion in compliance with b=2 in Taylor’s power law.

Population dynamical modelling is is deep theoretical trouble if Taylor’s power law with b≈2 does not pop up in the respective model outputs’ V(M) statistics – both from scale-specific sampling (same-sized sample units) and inter-scale sampling. Validating a model output against empirical V(M) data should be a standard procedure. Unfortunately, while this test of model realism has often been performed for scale-specific sampling it has never been simultaneously performed for inter-scale sampling! Compliance with b=1 for inter-scale population abundance has simply been assumed, or perhaps (wrongly) considered self-evident?

As far as I know, my Zoomer model is currently the only model that satisfies Taylor’s power law with b≈2 from both perspectives, intra- and inter-scale relationship of V(M). Further, the model may be parameter-tuned to cover the entire range 1<≈b<≈2, in compliance with the individuals’ average “weight” on scale-free space utilization on fine versus coarse scales. 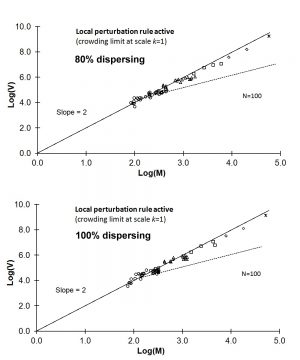 To the right I have reproduced Figure 40b in my book, showing two variants of the “local crowding” rule (strength of population dispersal away from localities that reach a critical density). The simulation indicates that the population dynamics under the given Zoomer model conditions produce inter-scale V(M) plots that are very resilient with respect to influence from self-inflicted perturbations. The V(M) plots are similar to the simpler scenario in the Figure at the top, with no crowding effect.

The Zoomer model is the population level’s version of individual-level Multi-scaled random walk (MRW). They are both derived from the statistical-mechanical parallel processing postulate for animal space use. The Zoomer model was developed in the early 90’s and was presented in print for the first time in my book (see Chapter 4 for an introduction), and thus preceding the MRW model, which percolates much of this blog.

Next, I will show compliance between the Zoomer model and scale-free, spatio-temporal fluctuations of a local population of sycamore aphids Drepanosiphum platanoides.
Statistical mechanics - populations Statistical properties of populations