July 31, 2017
Recent research on animal migration continue to challenge the paradigm of assuming relatively straight-line routes between start locations and respective targets, as shown in a study on blackpoll warblers Setophaga striata (Brown and Taylor 2017). The warblers had a surprisingly high degree of back-and-forth displacements during migration; apparently more than can be explained by adjusting steps to local habitat attributes along the path.

Migration regards an endpoint on the scale continuum from short term movement bouts to long-distance seasonal displacements. Thus, one of the core challenges for more realistic models in wildlife ecology regards how to conceptualize and then formulate (in short: understand from simulations and from testing model predictions) the multi-scaled cognitive processing of environmental information and displacement decisions in animals. This insight should account for all time resolutions up to the migration scale.

From Insecta to Aves and Mammalia, individuals over a wide range of classes have been verified to relate to their environment in a multi-scaled manner. Migration is just one expression of a more general property of movement. At the opposite end we have area-restricted search (so-called ARS), which is often modelled as a composite random walk; i.e., a diffusion process with periodic toggling between fine-grained and coarse-grained movement as a function of intra- and inter-patch displacements. At a somewhat coarse scale range we have intra-home range paths during a day or week in the summer season. Seasonal drift then brings in the property of movement towards the other end of the scale continuum – migration.

Traditionally, movement over this wide temporal scale range has been modelled as “push” functions. For example, in the ARS model, an individual is toggling to another magnitude of the diffusion parameter when a local resource patch has bee exhausted, invoking a stronger directional bias of the following path sequence. In simplified terms, less preferred habitat pushes the animal around with stronger force than movement bouts in a preferred habitat. Inhospitable habitat (“barriers”) pushes the animal back. Skipping mathematical details, push-driven dynamics is easy to model in principle, thanks to the extensive theory of diffusion and advection.

However, as all wildlife ecologists know, animals are also under influence of “pull” forces. Individuals are pulled towards the summer range when migrating from the winter range. In short, the pull factor involves spatial memory, based on previous experience from the area the animal is attracted to and in complex interplay with traditional migration routes. Influence from conspecifics with better experience optimizes the process (cultural inter-generation transmission of spatio-temporal knowledge). Again skipping mathematical details, pull-driven dynamics is much more challenging to model. The field is still characterized by immature biophysics, but progress is emerging. 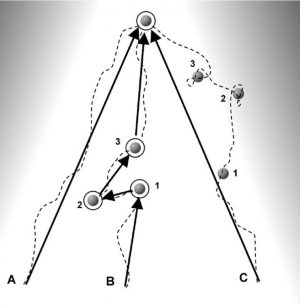 In Gautestad and Mysterud (2010) we illustrated this challenge by contrasting three hypothetical paths (see also more extensive descriptions in my book). Path A represents a correlated random walk with strong directional persistence. For example, consider the ARS model during a bout of inter-patch movement. Path B illustrates scale-free distribution of step lengths (Lévy walk), which is another form of moving around faster than the traditional standard random walk allows for. These variants belongs to the push framework.

Paths A and B both lack spatial memory, and just happen to reach a common location (upper bullet in the Figure) after a series of mechanistically executed displacements.

Path C illustrates the pull factor, resting on my parallel processing conjecture; i.e., the process involves a mixture of (a) a long-term goal to reach the upper bullet location in the Figure by using spatial memory and (b) simultaneously executing temporally finer-resolved goals “in parallel” during this displacement.

The respective fine-grained paths A, B and C are indicated by dashed lines. There is a qualitative difference between the three intermediate locations 1, 2 and 3 of Path B and path C. While the displacement from location 2 to location 3 of a Levy walk process (path B) is independent of the path’s history; i.e, reaching location 3 is independent of location 1, path C has inter-location dependence from start to end.

In short, parallel processing as conceptualized by path C violates the Markov principle. Hence, it also violates the dynamics of mechanistic modelling. Why? Because the pull-effect due to the goal to reach the upper location put constraint on how much wiggling and zig-zagging the animal can allow itself during the time interval to reach the target. Simultaneously (in parallel, thanks to the continuum of time resolutions involved in the process; see this post) the sub-steps 1 and 2 are performed under some degree of tactical freedom, given that these tactics are not violating the strategic goal to reach the target 3 within the coarser time resolution. For example, during your drive to work in the morning you may find you have have time to depart from your usual route to buy a newspaper in the kiosk a block or two away.

If the “buy the Newspaper” is a temporally fine-scale goal (short term impulse) relative to “reach my job in time” (your main task for the day), the two events – according to the parallel processing conjecture – are executed at different time scales. Under this framework the resultant vector for movement at a given instant in time cannot be understood as a superposition (sum) of various influences at that moment, regardless of reductionistic details (number of model terms) and their relative weights. Thus, the process is non-differentiable and non-mechanistic; ie., not Markovian. Hence, in my book I differentiate between mechanistic and non-mechanistic kinds of dynamics. Parallel processing regards an extension of the traditional statistical-mechanical theory, which rests on the superposition principle.

Back to bird movement. Brown and Taylor’s study on blackpoll warblers (Brown and Taylor 2017) illustrate some potential pull constraints during passerine migration:


Thanks to Brown and Taylor’s study and a wide range of supporting results that have accumulated on this topic over the years it is an increasing pressure on ecological theorists to come up with a more realistic framework to model multi-scaled movement; i.e., explicitly formulating the combination of push and pull (tactics and strategy) in a meaningful manner.