July 21, 2017
Over the years our Multi-scaled Random Walk (MRW) model has been empirically supported by various anecdotal observations and pilot tests, but also more extensive results, in particular our multi-faceted statistical analysis of a large database of red deer Cervus elaphus movement (Gautestad et al. 2013). The MRW model has now also been scrutinized by a team working on data from a non-mammalian species, Fowler’s toads Anaxyrus fowleri (Marchand et al. 2017).

In its generic form, the MRW represents a very basic statistical-mechanical description of animal space use, implementing complex space use from spatial and temporal memory utilization. It illustrates a statistically scale-free distribution of displacements (you may call it Lévy-like) in combination with a given frequency of return events to previously visited locations. By changing the values of a small set of parameters the model can be put into the context of specific biological-ecological settings. Conversely, by fitting the model to real space use data (like series of GPS fixes), ecological inference can be performed by interpreting these parameter values within the given universality class.

The MRW model has already been described in a range of blog posts. The model represents one of the eight corners (universality classes) of the Scaling cube (see Archive), which was first described in Gautestad (2015). As each successive revisit to a location increases its effective weight for future return steps, the MRW model allows home range patterns to emerge without the need to specify an ad hoc homing process*).

As stated by Marchand et al. (2017), the MRW – as do the other seven corners of the Scaling cube, represents a parsimonious model; i.e., a more powerful concept than a simple or generic model per se:

Being a parsimonious model – like Brownian motion (represented by, for example, classic random walk) – MRW should of course be subject to particularly strong scrutinizing tests. After all, MRW challenges the traditional approach to interpreting, modelling and analysing animal movement at a very fundamental level. However, as emphasized in this post (and others) the MRW model and its complementary statistical-mechanical framework has only recently gained stronger spotlight, both empirically and theoretically. For mathematical/physical study of the model and variants, see for example Boyer et al. (2016).

With respect to Fowler’s toads, the interesting analysis by Marchand et al. (2017) use Approximate Bayesian computation (ABC) to estimate the parameters of three variants of MRW, including the scale and shape of a Lévy-stable distribution of movement steps and the probability of returning to a known refuge rather than establishing a new one.


The assumption that toads returning to a previous refuge choose one at random may seem unrealistic. Yet it fits the data better than two alternative models we tested, where the probability of return and/or the choice of refuge were distance-dependent. Marchand et al. 2017, p 68.

In other words, they conclude that MRW in its generic form explained the data better than the more “biologically intuitive” variants.

Why do Fowler’s toads, red deer and other tested species apparently show little degree of distance-dependent returns when executing site fidelity? Marchand et al. (2017) do not speculate on the potential parsimonious aspect of this counter-intuitive result, but in my book I do:

“For example, consider a thread of a given length representing a movement path during a given time span from one location of the animal to the next, and this interval on average contains one or more returns to a previously visited site. If you stretch the thread to a unidirectional line, you get a large displacement during this time interval. If you curl it, the net start-to-end displacement is small. Anyway, the energy expenditure is similar since the thread length is similar. Both return steps (expressing site fidelity) and scale-free exploratory steps—the two main components of a MRW—contribute to curling of the path, which will vary in strength from one interval to the next.”
Gautestad (2015), p272. 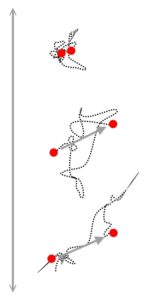 In the conceptual example to the right, ll three hypothetical paths with respective start- and end points (red dots, representing displacement during a given time interval Δt) have approximately the same stretched-out distance as the vertical reference line to the left.

When site fidelity is influencing space use, and unless the path show a strong uni-directional drift during the total sampling period, the animal’s path is jagged in a manner that typically is not reflected in detail at the temporal scale of data sampling or analysis. In my book I refer to this aspect as a consequence of the “hidden layer” (un-observed details) of a given movement path.

In other words, when animal displacements are collected at frequency 1/Δt and Δt (the actual time resolution for successive displacement collection) is substantially larger than what would be needed to reveal the fine-resolved path, one should – a priori – not expect to find support for Model 2 and 3 above. The MWR model is explicitly defined to represent a statistical-mechanical representation of movement; i.e., Δt should in fact be sufficiently large (the hidden layer should be deep) to ensure conditions for analysis at this temporally coarse-grained level of space use abstraction.

When it comes to energy expenditure, the MRW model rests on the conjecture that a given amount of kinetic energy pr. unit time Δt may be distributed over a range of spatio-temporal scales during this interval: many small displacements, some intermediate ones, and occasionally some very large ones in a scale-free manner (the Parallel processing postulate). This property leads to a Lévy-like step length distribution.

* In fact, the site fidelity effect under MRW does not depend on a self-reinforcing use of previously visited sites, since an intrinsic property of the model’s generic formulation describes return to go to an randomly picked previous path location. Absence/presence of a site specific positive feedback property (a site with several return events in sum leads to an increased future return probability, even if the probability pr. each of the previous returns from the perspective of the self-crossing path is equal) provides a testable aspect of its home range representation.