The Limited Scope of Lévy Walk and the LFF Model

December 07, 2018
The Lévy flight foraging (LFF) hypothesis describes a toggling between classic Lévy flight/walk (LW) and classic Brownian motion (BM) as a function of the individual’s current resource field properties (its “environment”). Both states of motion are statistical by nature – and explicitly defined as such. The LFF describes movement as random walk in two disparate modes; scale-free LW versus scale-specific BM. However, the LFF premise of animals moving like drunken LW/BM walkers logically does not make sense unless the animal in question does not possess a capacity for spatial memory utilization or because the environment is so volatile that returning to a previous location has no fitness value with respect to optimal foraging. Under these premises of value-less spatial map utlilization the LFF hypothesis should be expected to make sense, otherwise one should expect to find better compliance with other movement-related models and hypotheses.

The theoretical model developments surrounding both the LW concept in general and the LFF hypothesis in particular have ignited new life into the interface between biology (animal movement, behavioural ecology) and physics (Lagrangian aspects of statistical mechanics, biophysics of animal space use). At last, the classic random walk – Brownian motion (BM) – got justified competition, but recall that both LW and BM are variants of random walk; respectively scale-free and scale-specific. Hundreds of papers have emerged at an increasing pace over the last 30 years, exploring optimal foraging theory and other behavioral-ecological aspects using this statistical walk approach. However, despite the increasing pile of research that has verified LW-like movement in data the results have often spurred both confusion and controversy, including alternative explanations for LW-like power law compliance of step length distribution.

Setting the LW versus pseudo-LW discussion aside, my own critique has on one side focused on premise that the two movement classes contained in LFF regard toggling between behavioural modes, and not just realizations of basically deterministic behaviour that is viewed statistical-mechanically; through “a hidden layer” (path sampling rather than continuous observation). On the other hand I have also criticized LFF from the empirically supported perspective that LW is intrinsically scale-free with respect to processing time but in practical terms scale-specific with respect to processing space.

First, when a path is sampled rather than observing the movement behaviour directly, the statistical compliance with LW, BM or other classes is an emergent property of the statistical-mechanical and intrinsic property of the actual process, regardless of the degree of deterministic or stochastic movement mode at the real-time scale.

Second, how can a process that generates a scale-free distribution of step lengths be scale-specific in the spatial domain? The simple answer is the effect of environmental influence when moving in heterogeneous space. For example, a potentially long distance displacement in progress is under the LW model expected to be easily terminated (truncated) by movement-influencing events and local conditions that successively appear within the trailing perceptual field – the interrupt distance that idealizes a specific scale – as the animal moves along. Consequently, the result is a deflation of super-long step lengths relative to expectation from absence of such interrupts. Such “truncated power law” distributions of step lengths in a non-homogeneous environment dominates the empirical results, where scale-free movement is consequently constrained to medium-range displacements*. Further down this continuum towards increased frequency of large-step interrupts we meet the BM kind of movement – the patch utilization condition of LFF – where the scale-free aspect of movement has vaporized altogether. 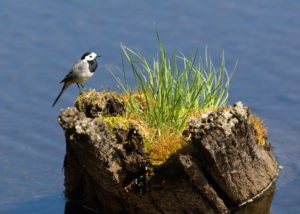 Picture: According to the LFF hypothesis, next time the wagtail Motacilla alba revisits this patch it is always by chance. A strategic future return; i.e., a non-random crossing of the bird’s movement path that is based on a decision outside the perceptual field surrounding this patch, requires an element of spatial memory. Photo: AOG.

However, many animals have been shown to perform scale-free movement also in heterogeneous space beyond the expected scale of potential truncation from local step length interrupts. Even during foraging such LFF breaking pattern has frequently been documented, as I have described with various references to empirical data in several posts in this blog. Some vital aspect of animal movement is obviously missing from the LW framework, and thereby also constraining the feasible applicability of the specific LFF hypothesis.

In my view there are two dis-harmonic properties of LW when confronted with empirical data of vertebrate movement; (a) the apparent ability of animals to be “back on track” after some kind of local event has interrupted a long-distance move in progress. This obviously violates LW’s intrinsic property of being a Markov compliant process. Further, (b) according to LW properties the individual is expecting to re-visit a previous location by chance only, not as a result of a strategic return. This behavioural aspect – involving spatial memory and strategic moves – is absent from the Lévy approach. Lack of spatial memory utilization does not harmonize with the behavioural ecology of a very wide range of species and ecological conditions. Vertebrates and large groups of invertebrates have now been verified to possess a capacity for memory map utilization. Under a very broad range of environmental conditions it makes sense to logically expect a potential fitness value from returning non-accidentally to a previously utilized food patch, for example.

In particular, under the premise of spatially memory-less LW, the emergent property of “clumped” and statistical fractal-compliant aggregations of locations from self-reinforced space use (strategic returns) cannot appear. If one finds support for scale-free space use in the step length distribution in combination with support for memory utilization – “the home range ghost” (I ≈ c√N) – it is not LW that has produced the pattern but Multi-scaled random walk (MRW). LW and MRW may under some conditions share a similar distribution of both displacement lengths and spatial distribution of relocations (power laws, with or without identical exponents), but only MRW embeds the expectation of a home range kind of space use. A home range is a verification of spatial memory utilization. Even under the condition where the ratio of returns vs. exploratory sallies under MRW is very small (leading to a larger home range for a given N; i.e., a larger c in the ghost equation), it still has a large statistical effect on how the animal is utilizing local patches with respect to self-reinforcing space use.

So far, whenever we have tested for LW vs. MRW it has been the latter that has been supported: a Lagrangian power law distribution of step lengths and an Eulerian power law compliant home range ghost equation. And the respective environments have been heterogeneous from fine towards coarse scales. Hence, a wide range of species seem to utilize their environment in a scale-free processing manner (due to the statistical power law compliance) over both time and space. This should have consequences for future tests of statistical patterns in animal movement, in particular with respect to model assumptions. New ecological methods should be implemented if memory is a factor.

I do not claim that the LW and the LFF hypothesis are erroneous – all I underscore is that these models’ assumptions with respect to absence of spatial memory influence should be scrutinized a priori and not taken as granted. I believe these models’ scope of realism will be accepted to be substantially limited if this introductory test is performed on a regular basis.

A statistical-mechanical modelling approach is needed when animal movement and space use is sampled; i.e., a hidden layer is invoked. One is studying not only the statistical aspects of the behaviour in the traditional sense. One is simultaneously also shifting the level of system abstraction from a temporally moment-to-moment analysis to a more abstract process level that appears from system coarse-graining of observational time scale (path sampling).

A statistical-mechanical theory for animal movement and space use should implement all variants of movement classes. In The scaling cube I have capture these classes by its eight corners, where the cube’s interior is expressing respective continua. From the Lagrangian perspective, spatio-temporally scale-free displacements are formulated by the MRW model’s step length distribution; from the Eulerian (spatially explicit) perspective the MRW model is expressed both by the Home range ghost formulation and by the complementary Zoomer model. The mathematical formulation of the parsimonious Zoomer model – a memory-extended statistical mechanics of ensembles of particles (individuals) under scale-free influence of conspecific attraction – is found in previous posts; e.g., in "Towards Complex Population Kinetics" (search Archive).

*) This pattern where the extreme section of the long tail part of the distribution is constrained does not per se lend support to the classic Lévy framework despite partly power law. Other models, for example the Multi-scaled random walk (MRW), also gives expectation of a truncated scale-free step length distribution over a wide range of conditions (see various posts on this blog).
Model assumptions - the individual level