February 01, 2016
One particular class of complex space use – Multi-scaled random walk (MRW) – implies that movement is influenced both by spatially explicit memory utilization and temporally multi-scaled goal execution; in short, it covers spatially explicit strategic locomotion, which may be processed over a range of temporal scales (the parallel processing conjecture; see the December post that summarizes the scaling cube).

In this Part II I continue to focus on statistical-mechanical properties I elaborate on the entropy aspect of movement. Specifically, I describe how this key property may be coherently maintained – albeit in a surprising manner – even in the non-classic kind of space use, as represented by the MRW model.

According to the standard framework, one should not expect a change of entropy when “zooming” in and out of a given system of a given extent. This property will now be rattled as we move to the scale-free condition.

First, the classic system condition. Consider that a virtual grid is superimposed on the spatial scatter of serially non-auto-correlated GPS fixes (see Part I of this group of posts). Whether the grid has small or large cell sizes, it is a matter of trivial re-calculation to express the home range’s utilization distribution at respective pixel sizes. Half as large pixel size (√2 smaller spatial scale) implies half as large density of fixes at this finer scale, calculated in terms of the new scale unit.

In short, “zooming in” towards finer resolutions does not improve information about the animal’s pixel location at the next relocation in the series. A finer grid reveals more details of the utilization distribution, given that the sample size of fixes is sufficiently large to resolve these details. However, the embedded entropy is expected to be trivially maintained at different pixel sizes for the defined macroscopic system – the home range.

Now, be prepared for a surprise as we change from a classic to a complex kind of space use. 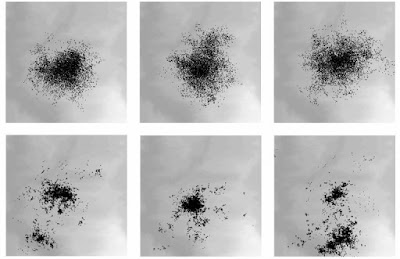 The illustration above is copied from Gautestad and Mysterud (2005). It shows three replicates of two model conditions of complex space use, represented by the MRW model. The upper row shows a scenario where the model animal on average has put stronger weight on short-term relative to longer term goals (MRW, β=3; see the post for the scaling cube). The lower row illustrates an animal that has executed goals more equally distributed over a range of temporal scales (MRW, β=2). As a consequence, in the latter case the space use on one hand seems to become less “dense” over the range of pixel sizes due to the higher level of fragmentation, and on the other hand space use seems more dense when the fragments alone are considered (more empty grid cells in the virtual grid at a given resolution, leading to fix concentration in the others). This difference between upper and lower row can be quantified by the fractal dimension of the spatial pattern of presence/absence (non-empty grid cells, called incidence, at respective resolutions), changing from approximately 1.4 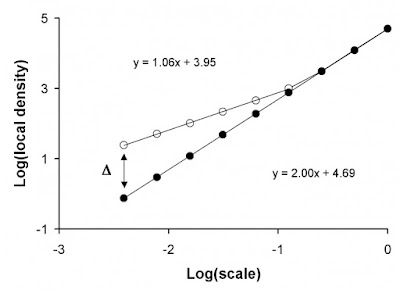