April 22, 2016
In Part I of this set of posts I described animal space use from the perspective of ergodicity. This is a key concept of standard statistical mechanics, with similar importance to analysis of individual paths and home range data under the extended theoretical framework (the parallel processing conjecture, expressed by the MRW model). Below I elaborate on this theme. I indicate by simulation examples the transition from a fully ergodic state on the home range scale to a narrowing of this scale as the series of fixes become increasingly autocorrelated (higher-frequency sampling).

From a biophysical perspective, the following system description may point towards my most important theoretical development since the Scaling cube. This will become clearer as I gradually turn my upcoming posts from description of statistical-mechanical properties towards how to explore these properties in novel methods for ecological inference.

First consider the general principle that the transition from non-autocorrelated data towards increased time-dependency (stronger serial autocorrelation) narrows the spatio-temporal scale range for which the statistical-mechanical system description is applicable. In the limit of very high frequency sampling we reach the biological resolution, where the animal’s behaviour is directly observable. In this limit “the hidden layer” has vanished. In my book I introduced the hidden layer concept to explain the ergodic principle in the context of animal GPS series (and allowing for a statistical-mechanical system description), and related ergodicity to the degree of serial autocorrelation.

However, here comes the novel and interesting part. In several blog posts I have described another important theoretical concept – the individual’s characteristic scale of space use (CSSU). In previous posts I have underscored that its estimation requires serially non-autocorrelated fixes. In the following simulations of MRW I show for the first time (a) how the CSSU concept may be extended in a theoretically consistent manner to auto-correlated series, given that the hidden layer is still sufficiently deep to allow for a statistical-mechanical system description, and (b) how this extension towards a time-dependent process description has implications for the system’s CSSU characteristics. 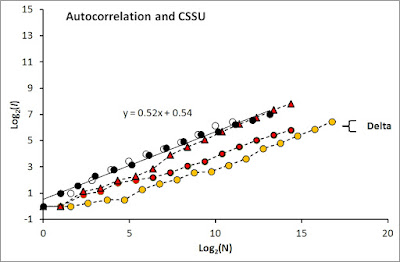 In the illustration to the left the standard result (serially non-autocorrrelated fixes) is shown by black/white circle symbols. After a “zooming exercise” to find the proper grid resolution for I(N) from the home ghost formula I(N) = cNz , CSSU is found when the y-intercept is close to the optimal, c ≈ 1 [log(c) ≈ 0]. At this grid resolution the power exponent is expected to be close to the default MRW condition, z ≈ 0.5. Filled symbols show the result from a large series, N=100,000. Open symbols show a separate analysis using the last 20% of the series; N=20,000. As expected, z and c are of similar magnitude, due to the series’ non-autocorrelation property. In this domain, z and c are expected to be independent both on sampling frequency and series length. Thus, CSSU estimation is resilient under this condition.

Then turn your focus to the coloured symbols, showing the average result from four replicates. The orange and red circles show log[I(N)] based on the same grid resolution as for the black/white circles, but now from strongly autocorrelated series as a result of higher sampling frequency. This is a project under development, but here follow some initial comments for this scenario.