April 15, 2016
Over the years the term “density” has provided a convenient variable for ecological inference, since it has a clear definition both at the individual level and the population level. For example, GPS fix density for a given individual and sample size of fixes is proportional with the inverse of the demarcated home range size when this is the area unit. By assuming the standard asymptote model for home range area, fix density N/area is higher when area is smaller. The MRW model, which contradicts the asymptote assumption and is incompatible with the density surface (UD) as a proper proxy for local space use intensity, still presents a proxy variable for intensity of habitat use.

In the MRW model the traditional density=N/area is replaced by H=(√N)/c‘ where c‘ is the individual’s characteristic scale of space use, CSSU. Thus, H is proportional with the inverse of CSSU. Contrary to density, which assumes area is intrinsically constant (the asymptote), H adjusts for N-sensitive area demarcation by depending on c’ rater than on the area asymptote. How is H expected to perform as a proxy for ecological inference – intensity of habitat use – in comparison to the traditional N/area, if selection is estimated at the level of the local population? Simulations provide predictions. 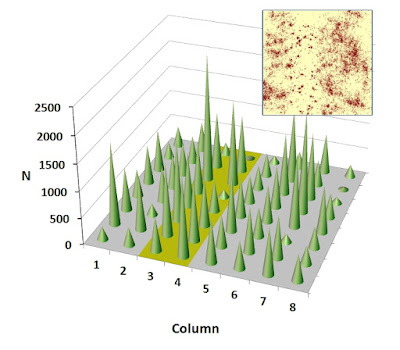 A smaller home range for a given individual is generally found in superior habitats. The Figure above is copied from Gautestad and Mysterud (2010), and shows the simultaneous space use by 100 individuals (superposition of 100 sets of fixes). The pooled spatial utilization pattern is generated from simulation of multi-scale random walk (MRW) at the individual level. A virtual grid is then superimposed, and local N is then counted at the cell level. The result illustrates how an initially random start location for the respective individuals lead to a heterogeneous dispersion of 100*N fixes among cells in a virtual grid (the inset image illustrates the local fix abundance).The two-column band of cells with a different colour in the 3D representation above regards localities with higher resource level, simulated by applying a five times higher H parameter than over the rest of the arena. A superabundance of resources is assumed for all patches over the entire simulation period in order to disregard crowding effects in this basic scenario (the result from this variant is described in Gautestad and Mysterud 2010). 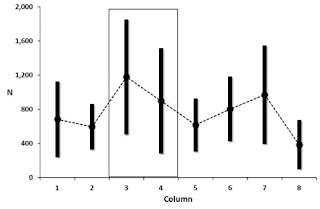 Does the density of fixes – the pooled utilization distribution (UD) – reflect this heterogeneous resource map in a clear and consistent manner? How does the UD compare to the locally estimated H index?

First, since we in this case are studying a scenario where the animals have utilized its habitat in a multi-scaled (basically scale-free) manner and under influence of spatial memory, we do not expect the UD to perform well. Such compliance would require that the animals moved classically – i.e., mechanistically and with Markov compliance – as described repeatedly in other posts. The illustration above indicates that the “superior” columns 3 and 4 does indeed have the highest density of fixes. However, the difference to the other columns is not substantial, and the intra-column standard deviation (vertical bars) is high. In short, the UD performs badly as a proxy variable for the true space use intensity in this scenario. 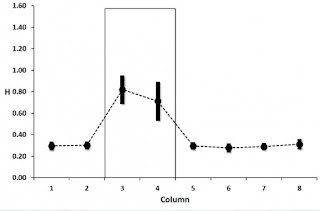 Then consider the MRW-derived utilization distribution – the H index – applied on the same data. The results speak for itself. As expected, the intensity of space use stands out clearly in column 3 and 4, and the standard deviation is small.

The crucial question is then – do individuals in real populations comply with the standard framework? If so, one should expect a similarly “sharp” proxy variable result from using the standard density of fixes, and the H index should be expected to perform poorly. On the other hand, if the MRW framework is more proper, a performance like the illustration above should be expected.

Of course, individuals’ response to a heterogeneous landscape will in reality be much more complicated than in the present illustrative example. However, this example illustrates the importance of applying analytical models from a process framework that complies best with the actual animal behaviour in statistical-mechanical terms.

If a Markov compliant behaviour is the most suitable framework for the space use process, use the classic density variable as a proxy for intensity of space use. If a non-Markovian behaviour (like MRW) is more suitable, use H. My book summarizes several approaches to pilot test which choice is the proper one for a given data set. Best of all, the methods are statistically simple to perform.

After this basic choice between two qualitatively different frameworks has been done, move forward with a more realistic model design; i.e., add terms for various habitat attributes that are considered important for local space use intensity and thus for habitat selection. In other words, move into the domain of ecological inference.