March 30, 2017
In my foregoing post I criticized the Burt legacy (Burt 1943) for hampering progress in analysis of animal space use on a local scale. Analyses of the spatial pattern of GPS fixes – when this has been explicitly explored by multi-scale methods – consistently confirm a statistical fractal with dimension 0.9 < D < 1.2 rather than a paradigm-confirming to-dimensional area demarcation (albeit with fuzzy borders; see below). In an ideal world the D≈1 result should lead to hefty follow-up tests from the community of animal ecologists for the sake of verifying or falsifying the “home range as a fractal”-model and its behavioural-ecological implications. After all, the home range concept is a cornerstone of animal ecology. Nope. The Burt legacy still appears impenetrable. However, things finally seem to start rolling.

After a quarter of a century long invitation period following the initial papers on the topic (Loehle 1990; Gautestad and Mysterud 1993, 1994) the application of fractal based approach that has spun off from the home range ghost concept (Gautestad and Mysterud 1995) has begun in small steps (Morellet et al. 2013; Campos et al. 2014). Also from the theoretical angle a development is finally surfacing along biophysically fascinating paths (Song et al. 2010; Boyer et al. 2012; Boyer and Romo-Cruz 2014; Boyer and Solis-Salas 2014; Boyer and Pineda 2016).

The D≈1 pattern, which represents “fix aggregation within fix aggregation within…”, needs to be understood in a multi-scaled context of animal space use, which is in conflict with basic assumptions under the standard home range concept and statistical methods. How should a fractal analysis proceed? For example, starting with a set of GPS fixes and analyzing it in a two-dimensional histogram, let the zero-count columns represent lack of incidence of GPS fixes (binary zeros), as opposed to non-zero columns (binary ones). The sum of the latter represents the home range representation, called incidence (I), at the actual grid resolution. The similar sums at other resolutions give a set of finer and coarser-scale representations of this “binary home range”. The initial analysis is simple:

While the theory for treating a home range as an area predicts an area asymptote for I(N); i.e., in compliance with the classical Burt model, the home range ghost model predicts a power law model. While the former in an ecological context invites to demarcate and study a home range area, the alternative model requires application of k* as an ecological proxy variable (larger k* resembles the idea of a larger home range).

At first sight a binary representation of a home range may appear to imply information loss in comparison to a continuous variable like a utilization distribution (“density surface”). However, D, k*, c and z in the binary modelling approach are all continuous quantities. Further, this framework’s analogue to the utilization distribution is a surface where the local variation of intra-home range density of fixes is replaced by intra-home range variation of (1/k*)2 = 1/c. All these novel system descriptors provide the alternative toolbox for ecological research on animal space use. 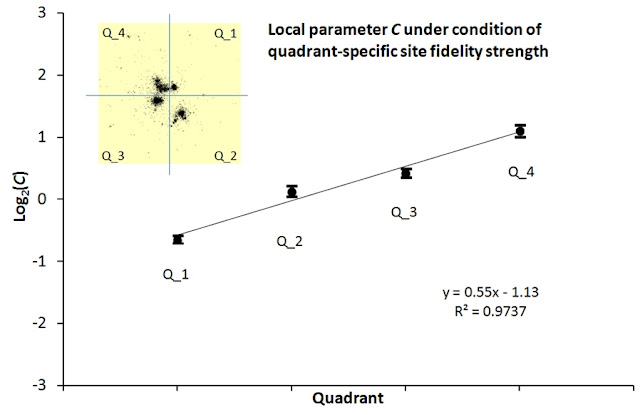 In the example to the right (simulated data) a large set of “fixes” is collected from a scenario where intra-home range intensity of space use varies between the four quadrats at k=1/2 relative to total area k=1. The parameter c is then estimated from subsets of fixes in respective quadrats. Details will become available upon publication (Gautestad in prep.).

The latter analysis – local variation in 1/c – implies splitting the spatial GPS scatter of fixes into spatial sub-sections (e.g., simple squares, or polygon demarcations of local habitat patches based on some ecological criteria). The embedded subset of fixes within each subsection of the home range is then subject of fractal analysis for the respective intra-home range locations. A preliminary pilot test of the latter involving empirical data rather than simulations was presented in this post.

As shown by the references above, applications and theoretical developments of the fractal home range model has only recently commenced beyond our own series of papers. Why is the D≈1 property of animal space use so difficult to relate to in the community of wildlife ecologists? It can’t be due to lack of proposals for concrete methodological guidelines (Gautestad and Mysterud 2005, 2012; Gautestad 2012, Gautestad and Mysterud 2013; Gautestad et al. 2013). Further, it shouldn’t be due to lack of theory-supporting empirical results (Gautestad and Mysterud 1993, 1995; Gautestad et al.1998, 2013). The basic statistical methods to test or apply the theory are also quite straight-forward, as summarized above. In particular, the key method to translate the spatial scatter of GPS fixes as a binary presence/absence of fixes in respective virtual grid cells and repeating this analysis over a range of grid resolutions is easy to implement both in R and other statistical packages.

Optimistically, I’m still waiting for the ketchup effect with respect to frenetic research on the home range as a fractal; the binary and multi-scaled representation of space use. This requires a critical evaluation of the Burt legacy. Thus, I may still have to wait for a while…

Gautestad, A. O., and I. Mysterud. 2012. The Dilution Effect and the Space Fill Effect: Seeking to Offset Statistical Artifacts When Analyzing Animal Space Use from Telemetry Fixes. Ecological Complexity 9:33-42.