MRW and Ecology – Part I: Introduction

October 26, 2017
In this “MRW and Ecology” series of posts I present summaries of simple ecological methods – based on alternative basic assumptions – for analysis of common ecological aspects of animal space use. These proposals are spin-offs of the first direction of research to explicitly break out of the Markovian strait-jacket in the present context. A broadened analytical approach – involving a qualitative shift of direction – is in my view clearly needed, as documented by the rapidly growing line of high quality and deep-level analyses of empirical data now appearing. For such an alternative direction the parsimonious Multi-scaled random walk model (MRW) may provide a feasible starting point. Over the years the MRW approach has been successfully tested empirically against the prevailing paradigm’s basic assumptions, or indirectly supported by alternative interpretations of respective analyses of space use and movement. Thus, now it’s time to step forward from testing behavioural feasibility of the theory towards ecological hypothesis testing, starting with summaries of some practical methods that are actually rooted in the MRW theory and its parallel processing postulate.

Readers of my papers, my book and this accompanying blog have for a long time been presented with one particular approach towards the qualitative shift of direction, conceptualized as one of the “ceiling” corners of the Scaling cube. In this corner of the cube – the MRW model – the traditional Markovian kind of statistical mechanics is replaced by the parallel processing postulate, covering both spatial and temporal scaling of process memory. In my view the present random walk paradigm (standard random walk and diffusion, composite and or biased random walk, specific kinds of Lévy walk and truncated Lévy walk, and other statistical-mechanical variants of Markovian formulations) seems to offer a too narrow theory to account for a realistic modelling of spatial memory effects in simultaneous combination with multi-scaled habitat utilization; i.e., covering a broad range of spatial and temporal scales). Fortunately I now register a gradually expanding network of ecologists who feel uncomfortable with the foundation of this general toolbox for dynamic and statistical modelling.

On one hand, my goal is to expand the network of curious peers. On the other hand I want to develop the theory towards applicability in various ecological contexts. After 25 years of theory development and tests of the parallel process postulate per se, as exemplified by the Multi-scaled random walk model as the alternative hypothesis, I feel time is more than ripe for this step in the direction of actual ecology. 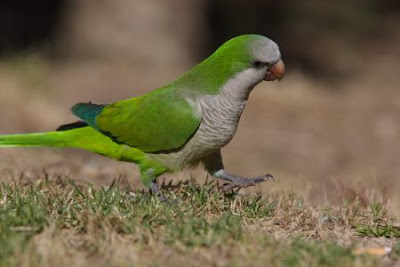 In parallel with high frequency scanning and responses to environmental input from its immediate surroundings, the monk parakeet Myiopsitta monachus (photo: AOG) probably also relates to its environment at coarser spatial and temporal resolutions; i.e, in statistical-mechanical terms it may comply with the parallel processing kind of space use. “In parallel with…” implies a different process regime than the standard mechanistic kind of dynamics, where the animal is assumed to successively toggle between various states and behavioural response regimes from one moment to the next. Over the time scale continuum a parallel processing compliant animal is assumed to be mixing frequent short term tactics with more long term strategy in a manner that is incompatible with a Markov process. In other words, a single time resolution is not sufficient to represent the behaviour. Over the spatial scale range the animal is assumed to cognitively be able to “zoom in and out” between fine-grained habitat details to more coarse representations of the previously explored environment (as stored in the individual’s memory map). A Parallel processing-based model provides alternative ecological methods with respect to basic assumptions.

Application of an extended statistical-mechanical theory of animal movement and space use is not a walk in the park, in particular when the large majority of theoretical ecologists in this field apparently are happy with the present set of basic model assumptions. Better to add more line segments to the regular convex polygon than to replace this geometry with the mathematics of a circle! In other words, to seek better coherence with the data, just add more terms to the present model. This dampens the hurdle of the peer review process and it makes it easy to find a suitable instrument in the R library of models and methods.

Hopefully, the upcoming series of “MRW and Ecology” posts will contribute to further clarification of the potential of the alternative approach, and spark additional tests and actual model applications on real data.
Model assumptions - the individual level