October 11, 2017
Random walk is one of the most sticky concepts of movement ecology. Unfortunately, this versatile theoretical model approach to simplify complex space use under a small set of movement rules often leads to confusion and unnecessary controversy. As pointed out by any field ecologist, unless an individual is passively shuffled around in a stochastic sequence of multi-directional pull and push events, the behavioural response to local events and conditions is deterministic! An animal behaves rationally. It successively interprets and responds to environmental conditions – within limits given by its perceptive and cognitive capacity – rather than ignoring these cues like a drunken walker. Any alternative strategy would lose in the game of natural selection. Still, from a theoretical perspective an animal path may still be realistically represented by random walk – given that the randomness is based on properly specified biophysical premises and the animal adhere to these premises. 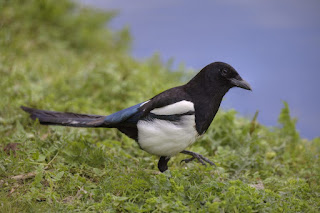 Outside our house I can study a magpie pica pica moving around, apparently randomly, until something catches its attention. An insect larva? A spider or other foraging rewards? After some activity at this patch it restarts its exploratory movement. As ecologist it is easy to describe the behaviour as ARS (area restricted search). In more general terms, the bird apparently toggles between relatively deterministic behaviour during patch exploration and more random exploratory moves in-between. If I had radio-tagged the magpie with high resolution equipment, I could use a composite random walk model (or more contemporary: a Brownian bridge formulation) derived from ARS to estimate the movement characteristics for intra- and inter-patch steps respectively, and test ecological hypotheses.

However, what if the assumptions behind the random walk equations are not fulfilled by the magpie behaviour? Now and then the magpie flies back in a relatively direct line to a previous spot for further exploration. In other words, the path is self-crossing more frequently than expected by chance. Also, the next day the magpie may be return to our lawn in a manner that indicates stronger site fidelity than expected from chance, considering all the other available gardens in the county. The magpie explores, but also returns in a goal-oriented manner, meaning that the home range concept should be invoked. Looking closer, when exploring the garden the magpie also seems to choose every next step carefully, constantly scanning its immediate surroundings, rather than changing direction and movement speed erratically. Occasional returns to a previous spot, in addition to returning repeatedly to our garden, indicates utilization of a memory map. In short, this magpie example may not fit the premises of an ARS the way it is normally modeled in movement ecology, namely as a toggling between fine- and coarser-scale random walk.

Hence, two challenges have to be addressed.
Regarding the first question, contemporary ecological modelling of movement typically defines the random parts of an animal’s movement path as truly stochastic (rather than as a model simplification of the multitude of factors that influence true movement), in the meaning of expressing real randomness in behavioural terms. The Lévy flight foraging hypothesis is an example of this specification. The remaining parts of the path are then expressing deterministic rules, like pausing and foraging when a resource patch is encountered, or triggering of a bounce-back response when sufficiently hostile environment is encountered. In my view this stochastic/deterministic framework is counterproductive with respect to model realism, since it tends to cover up the true source of randomness.

To clarify the concept of randomness in movement models one should be explicit about the model’s biophysical assumptions. Different sets of assumptions lead to different classes of random walk. In my book I summarized these classes as eight corners of the Scaling cube. Sloppiness with respect to model premises hinders the theory of animal space use to evolve towards stronger realism.

Regarding the second question raised above regarding Markov compliance, see the RW criterion in the Figure below [as was also exemplified by “Markov the robot” in Gautestad (2013)]. 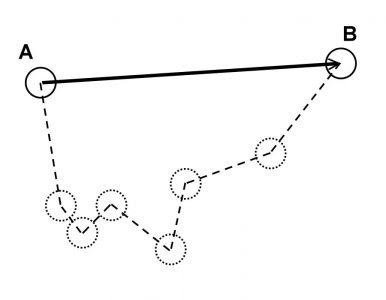 An animal is observed at position A and re-located at position B after t time units. The vector AB may be considered a RW compliant step if – and only if – the intermediate path locations (dotted circles) in totality are sufficiently independent of the respective previous displacement vectors to make the resultant vector AB random. Each of the intermediate steps may be caused by totally deterministic behaviour. Still, the sum of the sequence of more or less inter-independent displacements makes position B unpredictable from the perspective of position A. The criterion for accepting AB as a step in a RW sequence is fulfilled at temporal scale (sampling resolution) t, even it the “hidden layer” steps are more or less deterministic at finer resolutions << t.

However, what if the animal violates Markov compliance? In other words, what if it is responding in a non-Markovian manner, meaning that path history counts to explain present movement decisions? Is the magpie-kind of non-Markovian movement typical for animal space use, from a parsimonious model perspective, or is multi-scaled site fidelity the exception rather than the rule? These are the core questions any modeller of animal movement should ask him/herself. One should definitely not just accept old assumptions just because several generations of ecologists have done so (many with strong reluctance, though).

Instead of accepting classical RW or its trivial variants correlated RW and biased RW as a proper representation of basic movement by default, albeit while closing your nose, you should explore a broader application of other corners of the Scaling cube, each with respective sets of statistical-mechanical assumptions.