June 11, 2019
In the real world, animals typically tend to congregate at the landscape scale, even when they show repellence at finer scales (territorial behaviour). In contrast, one of the basic assumptions of the vast majority of mathematical population models is independent space use by individuals. In other words, it is assumed that the individuals do not show conspecific attraction but adhere to “full mixing” from independent space use. A strange assumption, indeed! Using the part of the Parallel processing theory (PP) that was summarized in Part I and Part II it is a simple statistical exercise to test if a given population’s dispersion obeys the full mixing assumption (the Paradigm); or alternatively, indicating a positive feedback tendency from PP-compliant space use (the Zoomer model).

The concept of conspecific attraction is verified among many species and taxa of animals. For example, lizards prefer to settle near conspecifics, even when unoccupied habitat is available nearby (Stamps 1987; 1988; 1991). Stamps (1991) searched the literature on territorial vertebrates but was unable to find any study in which a negative effect of the density of residents on the settlement of newcomers was demonstrated; i.e. the general assumption of habitat selection studies that prospective territory owners prefer relatively empty habitats proved to lack empirical evidence.

In contrast, in theoretical population models it is typically assumed that individuals both move and settle inter-independently. This “full mixing” assumption in models is a mathematical convenience. It is in fact a requirement, under the premise of the mean field framework, on which almost all population dynamical models adhere to. For example, to model population dynamics realistically with ordinary differential models one has to assume both full spatial mixing of individuals at the temporal scale of the analysis, and a closed system. If the system is open, one should apply partial differential equations, since this allows for an assumption of full mixing locally instead of system-wide (allowing for spatio-temporal “shifting mosaic” of local abundance) (Potts and Lewis 2019)*. The former is called a spatially implicit model, the latter is called a spatially explicit model.

The “full mixing” requirement in classic and contemporary theory of space use by populations is one of the main reasons why theoreticians and field ecologists often tend to drift apart. Logically, it does not make sense, even before considering behavioual fitness arguments! As I argued in Part I and Part II, independent movement and settlement in an open environment will over time drift a Markov-compliant population towards extinction from diffusion and Allée effects.

Empirical results show that (a) single-species populations tend to show scale-free spatial congregation, compliant with a power law (Taylor 1986), (b) empirical results continue to support Non-Markovian, spatial memory utilization by individuals, and (c) populations in general seem to adhere to the principle of conspecific attraction. References in by book and throughout this blog.

Scientifically, the primary question is: how to perform the initial task (prior to making follow-up ecological inference) to test for inter-dependent or independent space use? In other words, how to test if local dispersion is influenced by conspecific attraction?

Consider the PP-based model to represent a specific alternative hypothesis, which should be tested against the null hypothesis given by the Paradigm (for example, a reaction-diffusion model for spatially explicit population dynamics).

The protocol can be quite simple, at least in the first-level approach of analysis of empirical data.

Again, consider results from simulations of PP, in addition to a Paradigm compliant population dispersion. In the Figure below you find situation both from scale-free individual space use with extensive spatial overlap (the PP model, MRW) and scale-specific (Markovian compliant random walk, the Paradigm), and where both conditions are set to be void of intraspecific cohesion. This condition contrasts with the scenario in Part I, where I showed how a population with PP compliant space use generated a scale-free dispersion under influence of conspecific attraction. In the present two scenaria the conspecific attraction factor is absent. Individuals use space inter-independently, and below you learn how to test statistically for this lack of conspecific attraction at the so-called “landscape scale” under two qualitatively distinct model frameworks.

The result of such inter-independency ("full mixing") is seen in the lower part of the Figure. Both situations result in a lack of fractal spatial dispersion of abundance of the pooled set of locations. The reason is that the distribution complies with a negative exponential function (semi-log linear, not shown) rather than power law compliant one (log-log linearity, which - as shown - is not satisfied). 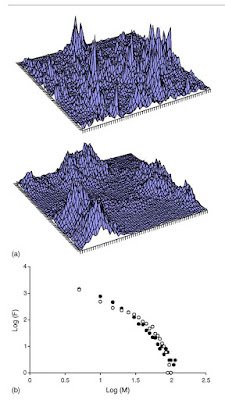 Image to the right: (a) Upper part: a superposition of five MRW series with relatively strong utilization distribution overlap. Lower part: a superposition of five series based on classic random walk with homing tendency, with less spatial overlap in inter-individual spatial utilization. (b) A log-transformed frequency histogram of local grid cell densities (M,F) for MRW superpostions (filled circles) and random walk-superpositions (open circles) shows that neither of the dispersion patterns at the population level satisfy a power law.

When these two distinct system conditions are viewed from the population perspective, they both lead to mean field-like system properties with respect to the (M,F) regression at the population level. In other words, even the scenario where individual space use was PP compliant, the lack of conspecific attraction masked the fractal PP property of individuals when analyzed at the population level. Under log-log transformation of frequency of cells in respective bins of grid cell abundance the regression lines were not linear; i.e., not power law compliant. Basically, to test PP compliant space use under the additional property of intraspecific cohesion from conspecific attraction one needs to verify a scale-free (log-log linear) frequency distribution of local density of individuals.

This result illustrates the interesting system property where space use at the individual level may adhere to scale-free dispersion of locations of respective individuals (analyzed separately) while space use at the population level (local abundance of the pooled sets of locations) apparently shows mean field compliance: local fluctuations of abundance are negative exponential compliant! Conclusion: the full mixing premise of the Paradigm – the mean field compliance – can easily be tested on real data.

In sum, we experimentally tested in breeding mallards two alternative and mutually exclusive hypotheses of habitat selection rules, and found more support for the conspecific attraction rule. However, taking into account the pattern of habitat distribution of breeding mallards (see references in Introduction; this study) pairs certainly use other ways of habitat assessment than mere presence of conspecifics. Some lakes had relatively stable pair numbers while others remained empty independently of experimental treatment.
Pöysä et al. 1998, p287

As I stated in Part II, “A given number of individuals cannot be everywhere all the time”. Thus, some lakes should – as a logical consequence under the premise of population "clumping" from conspecific attraction – always be expected to be void of breeding pairs…

*) Using the toolbox of partial differential equations and some alternatives it is shown how “diffusion-taxis” equations may show system-intrinsically driven heterogeneity of local population abundance between populations (Potts and Lewis 2019). However, this phenomenon regards interspecific cohesion (or repellence) between separate populations, not intraspecific cohesion. It is assumed that full mixing of individuals is satisfied for each of the populations at the temporal scale of analysis.

Stamps, J. A. 1987. Conspecifics as cues to territory quality: a preference of juvenile lizards (Anolis aeneus) for previously used territories. The American Naturalist 129:629-642.

Stamps, J. A. 1988. Conspecific attraction and aggregation in territorial species. The American Naturalist 131:329-347.

Stamps, J. A. 1991. The effects of conspecifics on habitat selection in territorial species. Behavioral Ecology and Sociobiology 28:29-36.