June 09, 2019
I briefly mentioned in Part I that the combination of spatial memory utilization and scale-free space use under the Parallel processing conjecture (PP) may lead to a fractal compliant population dispersion of intrinsic origin, given the additional condition of conspecific attraction. Below I elaborate on heterogeneous population dispersion as expected under the Paradigmatic framework (Markovian process, mean field compliance) and the contrasting PP kind of space use. In particular, one may find that two locations with different population density under the PP condition may reveal similar intensity of space use! Under the Paradigm such a result will appear paradoxical. Under the PP framework (the MRW and the Zoomer model) the paradox is resolved.

Before switching to empirical results, consider the following crucial question for ecological theory of space use. What is the driving force behind the typical pattern of a shifting mosaic of population abundance over a range of spatial scales, apparently even before the landscape structure (habitat heterogenity) is considered as a complicating factor? In other words, a population is heterogeneously scattered over space. This widespread phenomenon, widely documented in insects, was intensively debated during the last half of the 20th century. In particular, because the dispersion typically adhere to a power law of fluctuation of abundance, i.e., a scale-free phenomenon (Taylor 1986). However, despite many attempts over the years to model such complex patterns they still appear quite paradoxical, with little degree of consensus. My own attempt to drill into this phenomenon led to the idea and development of the PP concept already in the early 1990’s. I cite from my post “Simulating Populations VI: the Unrealism of Standard Models“ (search Arcive, post dated 10 March, 2018):

First, consider the condition where the individuals are living in an open environment, which is the general condition. No species is abundant everywhere, meaning that a given population is surrounded by unoccupied space […] In some cases this fringe zone may be easily understood from the perspective of unfriendly neighbourhood in habitat terms, but often the surroundings appear quite similar to the conditions inside the distribution range. For example, the over-all population may be spatially fragmented with respect to abundance; particularly along the core areas’ perimeters, with no apparent reason why small and large chunks of the intermediate areas should not be habitable. Pick any well-studied species, and ask an expert on its distributional range to explain population absence in some regions with apparently similar ecological conditions to the population’s present range. In an in my view unsatisfactory manner the way out of this dilemma (the “shoot from the hip” answer) is normally to point to some environmental factor still not revealed, or some kind of statistical chance effect. In my Zoomer model such apparently inexplicable “clumping” of a population is explained as an emergent property of conspecific attraction and scale free redistribution of some individuals. A given number of individuals cannot be everywhere all the time.

To illustrate concept of system complexity from intraspecific cohesion, consider the sketch below (Gautestad and Mysterud 2006). As shown in the upper row, even in a hypothetical homogeneous habitat the process of conspecific attraction predicts heterogeneous space use (upper right). As stated above, “A given number of individuals cannot be everywhere all the time”. Individuals are congregating spatially within the limits that are set by local environmental constraints (size of the circles; upper row, right). In a heterogeneous environment (lower row, right), where these local constraints vary, this intrinsic force is mingling with the effect from local conditions*. 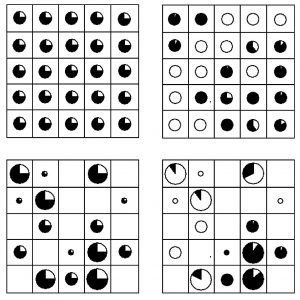 The concept of trivial and non-trivial congregation of individuals in a population below carrying capacity is illustrated in a hypothetical spatial arena, where the local carrying capacity (cc) is defined by circle size at grain scale 1/25 of arena size, and population density relative to local cc is defined by the black part of the circles. The two situations in the upper row show homogeneous arena conditions, while the lower parts show heterogeneous conditions. A trivial dispersion pattern (Paradigm-compliant) is illustrated to the left in both rows, where Poisson-variability in abundance is simplified as uniform mean density expectancy at similar local cc levels, and the expected abundance changing linearly (proportionally) with cc. Abundance below cc can – for example – be due to a population slowly recovering from a recent resource bottleneck event. A population growth rate that is slower than the rate of inter-population mixing is traditionally assumed in population dynamics models, due to their assumption of valid mean field approximations. Thus, individuals are expected to be distributed in linear proportion to local resource levels even below carrying capacity levels. A non-trivial abundance pattern (PP compliant), to the right in both rows, is defined as density levels that does not correlate proportionally with cc fluctuations, whether cc is uniformly dispersed or not.

The sketch illustrates population dispersion at the given spatial scale of the virtual grid. Crucially, under PP a similar kind of heterogeneous dispersion with similar parameter values except for a trivial rescaling operation is expected if the observational scale is changed to another grid resolution. In other words, the dispersion is statistically scale-free, or fractal-compliant.

Consequently, both at the individual and the population level, to study PP-compliant space use where this property is verified (scale-free and memory-driven patch attraction or conspecific attraction, respectively) it is required to use PP-derived methods to infer intensity of local space use. This contrasts with the simpler expectation from standard mean field compliant modelling (the Paradigm), where a relatively straightforward positive correlation between local resource level and local abundance is expected (upper and lower left images in the Figure). As repeatedly shown elsewhere, under the Paradigm the intensity of space use is basically proportional with population density. Under the PP model, the intensity of use is less straightforward, and requires different quantification.

As an example of the statistical strength of applying PP-derived methods to study habitat selection where the animals had scale-free and memory-influenced space use, follow this link (PDF).

To summarize, one should first test whether a given space use dispersion complies with the Paradigm or the PP framework. Next, one should apply a method from respective statistical toolboxes to infer ecology, like quantifying local intensity of space use as a function of – for example – local resource level.

By applying a PP model, one may find that two locations with similar local density of individuals have different intensity of space use (indicating different strength of habitat selection). One may also find that two locations with different density may reveal similar intensity of space use! Under the Paradigm such results appear paradoxical. Under the PP framework (the MRW and the Zoomer model) the paradox is resolved.

*) At the individual level and using the MRW model, a similar self-organized “clumping” emerges due to self-reinforcing patch use from targeted returns.