June 03, 2019
Animal survival requires some kind of intraspecific cohesion (“population glue”); an intrinsically driven tendency to counteract the diffusion effect from free dispersal. Populations of most species live in an open environment. Thus, without some kind of behavioural capacity to continuously or periodically seek and maintain contact with conspecifics only the most extreme and bizarre kind of environmental constraint would be required for the species’ long term survival. Despite the general agreement on this basic requirement, ecological models for individual movement and population dynamics have for a century maintained a different paradigm, a stubborn assumption that the animals follow the basic principles of mechanistic (Markovian) movement at the individual level and diffusion-advection laws at the population level. Fueled by empirical results and – in my view – common sense the Paradigm has from some researchers come under attack for many years, but mostly in vain. Ecological models and statistical methods are still deeply dependent on the Paradigm.

Visual, auditory and olfactory cues are often not satisfactory mechanisms for individuals to effectively return home when a sally brings them too far away to maintain sufficient population contact. Hence, under the premise of Paradigm compliant behaviour*, the result is an extensive “lost in space” risk, in particular at the fringe zones of a population. However, since field data typically reveals a capacity for targeted returns beyond sensory guidance, this property should be included in space use model designs where applicable.

What does “a capacity for targeted returns beyond sensory guidance” mean? In both the book, in papers and throughout this blog I have presented two complementary and parsimonious models for the individual and the population level respectively, the Multi-scaled random walk (MRW) and the Zoomer model. These inter-coherent approaches are based on two Paradigm-opposing assumptions; (a) individuals have a capacity for spatial memory, and (b) individuals are processing this spatio-temporal information in compliance with the Parallel processing conjecture (PP; providing a potential for scale-free habitat utilization along three axes; space, time and scale). Both PP aspects are hypothesized to be key to mimic real population dynamics realistically. For example, they open for “a capacity for targeted returns beyond sensory guidance”. 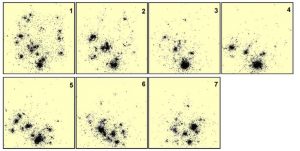 How to mimic conspecific attraction at the system resolution of individuals? The series to the left show the accumulated spatial dispersion of relocations from seven simulations of MRW with partly inter-dependent series, by letting a uniformly sampled subset of locations, a ‘‘seed set’’, from one series become a starting point for another series. This seed set kernel, the common ‘‘return base’’, then represents a space use template, which the new series will tend to emphasize for the rest of the series. This can be interpreted as an animal that is utilizing its habitat similarly but not identically to another individual with respect to patch preferences over a range of scales. In particular, the individuals also share some common meeting points. The smaller the seed set, the more independent space use by the individuals. From Gautestad and Mysterud (2006).

Most crucially, I have presented several statistical methods that have the power to test PP-compliant space use against the Paradigm, including the challenging task to differentiate between PP and Markov-compliant execution of spatial memory. I have also presented several such tests on empirical data. On one hand, the spatial dispersion of an accumulated set of individual relocations (fixes) and on the other hand a snapshot of population dispersion of individuals produce clear statistical fingerprints using proper analyses, which can distinguish between a Paradigm- and a PP-compliant kind of behaviour.

If the PP conjecture continues to gain support, it is a short step to prolong this parsimonious modelling approach to explicitly explore the mathematically challenging aspect of intraspecific cohesion from conspecific attraction – outside the comfort zone of standard mechanistic and statistical-mechanistic (Markovian) designs. The illustration to the right shows an example using the MRW design. Alternatively, the Zoomer design could be explored if one prefers a population level abstraction of space use (an “ensemble” rather than a “particle” approach in statistical-mechanical terms).

Basically, both approaches require just one extra assumption to study intraspecific cohesion. This assumption states that contact with conspecifics represent a resource for the animals, in a sense in line with other resources like food, shelter, refuges from predators, and so on (Gautestad and Mysterud 2006). However, inclusion of conspecific attraction in compliance with the PP conjecture predicts a qualitatively different kind of dynamics than you find under the Paradigm, resulting in complex space use and population dispersion. In particular, space use dispersion of individuals and local density fluctuation of the population develop an emergent property of a statistical fractal (aggregations within aggregation within…).

A log–log transformed histogram of frequency of local grid cell densities of locations from the merged set of the seven series of relocations confirm a power law distribution with slope close to the expected -1 (superimposed, best fit). The result supports a statistical fractal of space use for the population of individuals. From Gautestad and Mysterud (2006).

By applying the PP-developed methods, both the MRW and the Zoomer model find support in data covering a wide range of species and taxa. Long-lasting but generally under-communicated paradoxes that appear when the Paradigm is confronted with real data find solution under the complementary PP models.

As always in ecology, exceptions to the general rule should be expected, but so far the PP compliance seem to be very comprehensive across the animal kingdom of vertebrates, and apparently also among many invertebrates (references are given in my book and here in my blog). Again, I challenge readers to test their own animal space use use data; whether they regard GPS fixes of mammal movement or multi-scale analysis of population dispersion of insects.

Unfortunately, my book (Gautestad 2015) is still the only extensive theoretical wrap-up of the Paradigm, why it needs to be replaced as the default framework of space use ecology, and how an alternative approach may be developed, explored and empirically tested. A broader scrutiny – involving follow-up from expertise covering a wide range of fields from wildlife management to theoretical modelling – is needed.