May 13, 2016
In previous posts I have mostly assumed serially non-autocorrelated fixes, and simulations have also reflected this coarse temporal sampling scale. However, in this post I started exploring the autocorrelation effect’s interesting statistical-mechanical properties. In this post I elaborate further on this theme, in particular its enhanced effect on the N-paradox under the kernel density estimation (KDE).

From a statistical-mechanical perspective a high degree of coarse-graining of an animal’s space use is an advantage, due to a deep “hidden layer” and – consequently – better compliance with the ergodic principle in statistical mechanics. In short, system parameters are more precisely estimated when some spatio-temporal scale distance from the animal’s true path is achieved. In practice GPS series are often collected at high frequency in order to give large series for statistical analysis. This is an advantage for detailed ecological inference at the behavioural “micro-scale” of path analysis, but may hinder a proper statistical-mechanical approach towards description of statistical-mechanical system properties. However even in the domain of serially autocorrelated data the statistical-mechanical analysis makes sense, given that the system extent is similarly constrained (spatial range needs to be constrained to reflect finer temporal resolution, and thereby reinstate better compliance with system ergodicity (Archive: search this term). 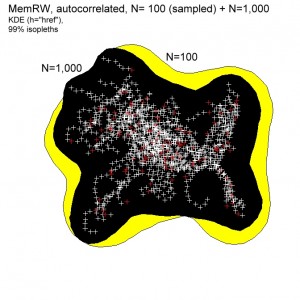 I have previously criticized the KDE for lack of power to distinguish scale-specific from scale-free space use. In the two illustrations to the right I show a similar KDE analysis based on more high-frequently sampled paths, leading to serial autocorrelation. I acknowledge that KDE is strictly meant for non-autocorrelated series. However, since many are applying this approach also for high frequency series I briefly comment on this scenario here. 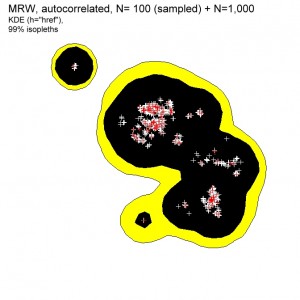 I have previously documented how the KDE is unable to differentiate between a scale-specific and a scale-free kind of space use. Thus, under the condition of scale-free space use (and consequently applying the proposed incidence method – counting non-empty virtual grid cells for a given N – as an alternative to KDE) auto-correlated series require some additional caution with respect to estimate the important MRW parameters c and z. These parameters are estimated from the home range ghost formula for incidence, I(N) = cNz.

Exploration of simulations leads to the following rules-of-thumb: 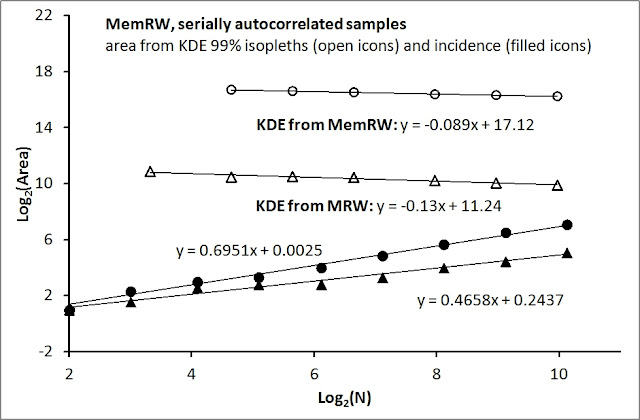