May 20, 2016
My statistical-mechanical model representative for simulation parallel processing – the Multi-scaled random walk (MRW) – unifies two traditionally disparate directions of research; theory for site fidelity (area-restricted space use, the home range) and theory for scale-free movement (Lévy walk-like). Space use is represented by a set of relocations (fixes). The fixes are assumed to be collected at a sufficiently large interval (lag) to ensure a statistical-mechanical representation of the system. MRW is characterized by a wide range of system properties. Some have been explored by simulations and subsequently supported by empirical pilot tests on a wide range of vertebrates. However, verification of some model assumptions have been left behind for another day. Here I catch up with three of them.

I have previously described the individual’s characteristic scale of space use, CSSU, as the MRW model’s proposed substitute for the problematic “home range size” concept.

Using serially non-autocorrelated samples to study individual space use, CSSU describes the “balancing scale” where outwards area expansion under increased sample size of relocations N (“the Home range ghost”) is counteracted exactly by the inwards expansion from resolving finer-grained details of spatial use as N is increased. CSSU has a great potential for ecological inference. For example, it is expected to be smaller under more favourable conditions (larger return frequency to known patches). This effect – smaller CSSU and smaller home range for a given N and average movement speed due to stronger homing – has already been verified in simulations (Gautestad and Mysterud 2013). Smaller CSSU for a smaller movement speed for a given homing strength has also been explored (Gautestad and Mysterud 2010).

The image below shows simulated space use, produced specifically for this post. It confirms the MRW model’s assumption that CSSU is not only independent of sample size of relocations, N, but also independent on sampling frequency 1/t, in the domain of non-autocorrelated fixes (the ergodic condition at the home range scale). 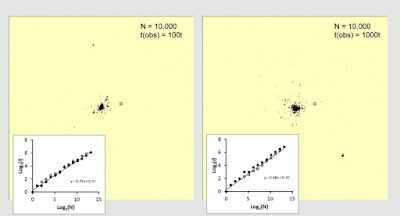 However, the intercept log(c) is not exactly zero for the actual choice of g, and this implies that a slight adjustment is needed to find CSSU:

where g is the two-dimensional unit grid size (pixel size), which was was applied to produce the I(N) result to find c in this demonstration. D is the fractal dimension of the scatter of fixes. Due to the small discrepancy between estimated c=1.23 and the ideal c‘=1 (“area pr. relocation”), the adjustment from c to c‘ may be performed with simple arithmetics as shown. Larger discrepancies would require a “zooming” exercise on grid resolution, g, to achieve an intercept closer to c=1, which represents CSSU.

Assumption 2: superposition of space use by several individuals sharing the same area does not corrupt the CSSU estimate for the pooled set of fixes 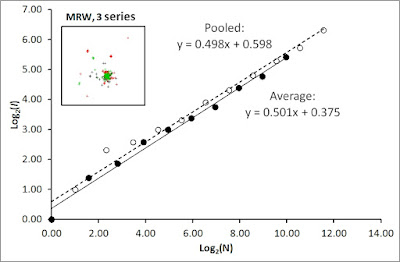 When two or more individuals are utilizing the same area, the MRW theory assumes that the respective sets of relocations (inset in the illustration above) may be pooled prior to estimate the individuals’ average CSSU in this area and under the given conditions. The present “quick and dirty” pilot test using three simulated series indicates that this is indeed the case. Both the slope parameter z and the intercept log2(c) are of similar magnitude for the average regression of the three sets separately (filled circles) and the pooled set (open circles). A practical dependence on this assumption was shown in this post.

In due course a more formal test should be performed with respect to both MRW assumptions above, though, to verify that in the limit of large samples and large number of pooled sets the slight discrepancy shown here is indeed vanishing. 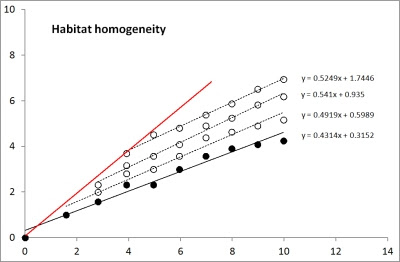 In a previous post I explored the kernel density estimate (KDE) under condition of habitat heterogeneity, which was implemented in a simplistic manner by adding some spatial “attraction points”. It was shown that the KDE’s inherent N-paradox was quite resilient to the effect from changing from a homogeneous to a heterogeneous environment.

In the illustration above and below I have explored if this resilience to environmental conditions also regards the CSSU estimate for the same MRW data sets (non-autocorrelated fixes). The open symbols regard incidence collected at different spatial resolutions (pixel scale), and the series with filled symbols reflect the best approximation for CSSU (see preliminary procedure above how to adjust for the final calculation of CSSU at c=1; a more stringent method to be presented in an upcoming post). Theoretically, since the CSSU is reflecting the average space use scale within the given spatial extent, such an average should not be dependent on its variance (e.g., from embedded habitat heterogeneity). 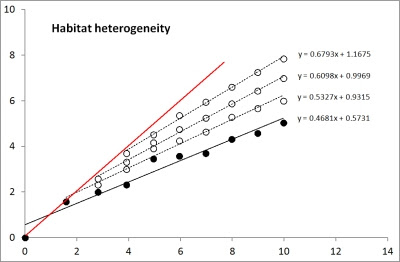 The present pilot test seems to confirm this assumption. Using the same MRW series as in this post and this post, the respective CSSU estimates are quite similar. Follow-up studies are needed, though, to confirm this kind of resilience under large-sample data conditions and a broader range of habitat heterogeneity.

Gautestad, A. O., and A. Mysterud. 2013. The Lévy flight foraging hypothesis: forgetting about memory may lead to false verification of Brownian motion. Movement Ecology 1:1-18.
Statistical properties of MRW