February 18, 2018
In Part I of this series I presented spatially extended simulations of intrinsically driven population dynamics under the standard statistical-mechanical premises (intrinsically scale-specific), using a parsimonious Coupled map lattice (CML). In this Part II the framework will be extended with a scaling axis, orthogonal on space and time, to account for populations of individuals with space use satisfying the Multi-scaled random walk (MRW) properties. Using this scale-extended kind of CML design – the Zoomer model – I show how scale-free space use tend to generate spatial autocorrelation at the population level from conspecific attraction.

The Zoomer model includes all the four standard BIDE rates (Birth, Immigration, Death and Emigration), and it is also spatially explicit. However, contrary to standard coupled map lattice models, spatial scale (the “lattice”) is implemented in a multi-scaled manner. This “scale range” approach allows for formulation of various aspects of complex population kinetics.

“Intrinsically driven dynamics” implies that the model is simulated under the condition of a homogeneous environment. As soon as the behaviour (dynamics) under this parsimonious condition is understood, environmental heterogeneity can be introduced for easier interpretation and improved realism. MRW-based behaviour at the individual level implies spatial memory and scaling under a premise of the parallel processing conjecture (search Archive).

In a simplified scenario, consider that a tendency for conspecific attraction is the main driver of the population kinetics. Further, consider that we study the process at sufficiently fine temporal and spatial scales to allow us to disregard the “slower” rate BIDE terms (it will be trivial to account for these processes as well). 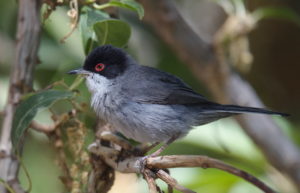 Picture: A sardinian warbler Sylvia melanocephala (Southern Spain) has tactical focus on chasing insects, watching out for raptors and relating to other inputs within its current field of perception. The Zoomer model assumes that the warbler and its conspecifics are also “background processing” past experiences in a manner which makes it able to relate to its environment over a wide range of spatial and temporal scales (spatial map utilization). One such environmental cue could be conspecific whereabouts. Photo: AOG.

Below I take previous presentations a step further by extending the Zoomer model with fine-scale diffusion and a weak level of birth and death rates. Diffusion represents local randomization of individuals, based on memory-less, Markovian compliant moves. In the present simulations I assume that this kind of standard-model redistribution of individuals for the most part is contained at finer spatial scales than the finest grid cells in the simulation arena. Below I explore two scenaria; 0% and 1% nearest neighbour diffusion rate, respectively, at the unit scale (smallest grid cells) during a time increment. I also set the weak growth rate of 1% (survival rate 99% and reproduction rate 2%), as in the Part I simulations under the standard CML model.

Zero diffusion implies that any random walk-like movement (in a statistical-mechanical sense) of individuals takes place inside the unit grid cells only, on a 32×32 cell arena. One percent diffusion to nearest-neighbour cells makes this process substantially weaker than the zooming process from complex dynamics, where 5% of individuals at each time increment are “reshuffled” with equal weight (distributed equally) at respective scales 21, 22, 23, 24 and 25 relative to the smallest grid cells; i.e., 1% pr. scale level beyond the unit scale 20=1. This difference in model design makes sense, given the recent empirical confirmation of complex animal space use at the individual level, over a wide range of taxa and ecological conditions.

While the “zoomers” during a given time increment are distributed equally over the actual scale range, they are “zooming in” from scale level k+1 to to their neighbourhood at respective scales k-1 where the local population density (from that scale’s perspective) is highest at that moment. Hence, it is assumed that the individuals have the cognitive capacity to interpret respective scales’ general level of conspecific density with the help of historic experience from the environment (as supported by empirical tests and anecdotal support of the MRW model). In other words, the memory map is providing the raw data for these individual considerations what neighbourhood to zoom in to.

In summary, standard diffusion-compliant reshuffling of individuals (tactical, memory-independent behaviour) is constrained to very fine spatial resolutions, while multi-scaled reshuffling is distributed over a scale range covered by the model’s grain to extent range.

The intriguing property of this construction is model coherence between scale-free distribution of displacement lengths at the individual level (a power law, with tail exponent β ≈ -2; i.e., Lévy walk-like if we ignore the spatial memory aspect) and scale-free inter-scale redistribution of the density surface at the population level. In my book and in several blog posts I have provided many examples supporting the present model assumption that the tail of individual movement lengths can span a decently large population range (for example, recall a post for the lesser kestrel example, and another post for the Florida snail kite; search Archive).

Since the zooming rate between scale k and scale k+1 is 1% for all zoomer scales 1, 2, …, k, …, 5 included in the present model, this implies that individuals during an increment on average has a 1% chance of moving a distance of magnitude (k+1) relative to distance (k); which contains 22 = 4 times as large cells. However, this lower probability for long-distance moves is compensated for by (21)2 = 4 times as many individuals embedded in a k+1 grid cell than a cell at scale k (Gautestad and Mysterud, 2005). Hence, a constant cross-scale zoomer rate at the population level reflects power exponent β ≈ -2 in the step length distribution at the individual level, under the assumption that individuals on average are putting “equal weight” into space use at respective scales.

Further, in the present illustrative simulations with weight on intrinsic population dynamics the main driver for spatial redistribution from zoooming is a tendency for conspecific attraction. Avoiding getting lost in space relative to the local population is obviously an important driver for animal space use. Zoomers to a specific level k+1 during Δt are assumed to prefer to move to the highest local population density in the individual’s neighbourhood at scale k. Again, I have to refer to my papers, my book and other blog posts for details. 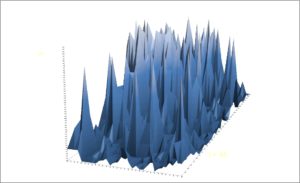 Finally, let’s turn to the Zoomer results. Activating zooming to all levels beyond the unit scale, and setting diffusion rate to 0%, leads to the three snapshots to the right after a couple hundred iterations 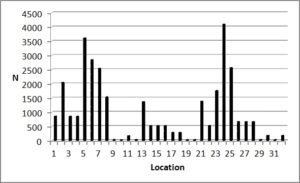 Setting diffusion rate to 1% and confined to scale k=1, leads to a somewhat smoother density surface, as shown by the thre images below to the left.

As was the case for a non-zooming condition (Part I), also the Zoomer model shows a steep log(M,V) plot, which reflects a high degree of spatial autocorrelation in the density surface of the population. Small-scale diffusion tend to smoothen the density surface and reduce the y-intercept [log(a) becomes somewhat smaller]. However, as long as the population is by the most part undisturbed by perturbations from the local carrying capacity ceiling the power exponent remains close to b=2, as for the non-complex CML scenaria in Part I. 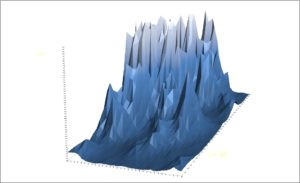 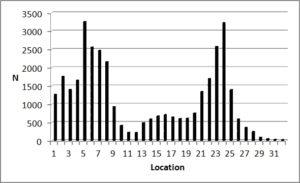 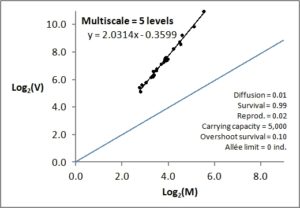