February 01, 2018
Focusing on the statistical pattern of space use without acknowledging the biophysical model for the process will create much confusion and unnecessary controversy. Ecologists are now forced to get a better grip on concepts from statistical mechanics than earlier generations. For example, to understand the transformation from data on actual behaviour to pattern analysis of space use, the concept of the hidden layer represents the first gate to pass.

Research on animal movement and space use has always had a central place in ecology. However, as more field data, better computers and more sophisticated statistical methods have become available, some old dogma have come under attack. Specific theoretical aspects of this quest for improved model realism have emerged from the rapidly growing cooperation between biologists and physicists in the emerging field of macro-level biophysics. The so-called Lévy flight foraging hypothesis is one example. And, of course, I can’t resist mentioning the MRW theory. 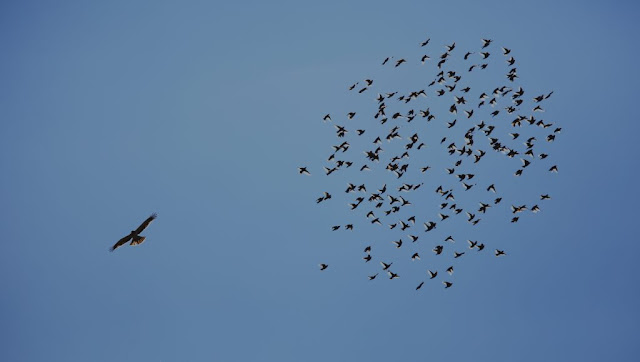 In 1985 Charles Krebs described ecology as the scientific study of the interactions that determine the distribution and abundance of organisms. In an ethological context animal space use is studied on two levels – tactical and strategic. The tactical level regards understanding individual biology and behavioural ecology on a moment-to-moment temporal scale. Strategic space use adds an extra layer of complexity to the tactical behaviour. In a simplistic manner we may refer to this layer as the animal’s state at a given moment in time; for example whether it is hungry or not (e.g., in hunting mode). Strategy also involves processing of memory-based goals. Strategies executed at coarser time scales than tactics. Some of the interaction between tactics and strategy may then – under specific conditions (see below) – be transformed to dynamic models at the tactical level; so-called mechanistic models, which consists of a set of executable rules covering respective cognitive and environmental conditions. Validating the model dynamics and resulting statistical patterns against real animal data then rates the degree of model realism. For example; realistic, tactical models have been developed to cast light on the “clumping behaviour” (dense swarming) of flock of birds that are threatened by a raptor.

The myriad of rules that influence animal movement makes detailed modelling an impossible task, and would anyway only lead to a descriptive picture with no value to ecological hypothesis testing. In fact, the signature of successful modelling is simplification. Thus, only specific aspects of the reference individual’s behaviour can be included and scrutinized.

The present post addresses one particular aspect of system simplification; coarse-graining the temporal scale. This approach implies a qualitative change of how the space use system is observed and analyzed. Actually, temporal coarse-graining is forced upon us when studying animal space use from sampling an individual’s successive displacements as a series of locations (fixes) during a given period of time. During each inter-fix interval the observed displacement regards the resultant vector from a myriad of intermediate and unobserved events. What has happened to the moment-to-moment kind of behavioural ecology? It has become buried below the hidden layer.

At the surface of this hidden layer you lose sight of behavioural details (like raptor response and swarming rules) but you gain access to an alternative perspective of movement and space use. Alternative statistical descriptors are emerging at this temporally coarser scale, following the laws of statistical mechanics. What is analyzed above the hidden layer is the over-all pattern from many displacements events that are aggregated into a spatial scatter of fixes.

For example, you may coarse-grain both the temporal and spatial system dimensions, and study the aggregated distribution of fixes at the spatial scale of virtual grid cells (pixels) and temporal scale of the fix sampling period. The spatio-temporal variations in intensity of space use within the actual space-time extents then allows for modelling and hypothesis testing, but now using statistical-mechanical descriptors of space use intensity. These descriptors are either not valid below the hidden layer (e.g., the information content of local density of fixes) or they have an alternative interpretation (e.g., movement as a “step” versus movement as a resultant vector for a given interval and location). Both levels of analysis require large sets of input to allow for statistical treatment.

Why is the hidden layer concept and the statistical-mechanical approach more important to relate to today than in earlier decennia? The short answer is the realization – seeded by better and more extensive data – that animal space use involves more than a couple of universality classes of movement (see this post). In fact, in my book, papers and blog posts I have detailed eight classes, most of which are unfamiliar to you.

To understand space use that is influenced by spatial memory and scale-free movement, statistical mechanical modelling is a prerequisite for realistic representation of such complex systems, unless you limit your perspective to a short-term behavioural bout within a very localized arena. In other words, “a single piece of a jigsaw-puzzle of space use dynamics”. For example, if you zoom closely into a small segment of a circle you observe an approximately straight line. Take a step outwards, and you are facing the qualitatively different geometry – the mathematics of a curve and finally a full circle. Stubbornly staying within the linear framework when analyzing more extensive objects than what you observe at fine scales will force you into a corner filled with paradoxes.

Fine-grained and coarse-grained analyses of animal space use are complementary approaches to the same system.
Statistical mechanics - individuals