February 19, 2018
In the previous parts I-II of this series I described two variants of spatially extended population dynamics, represented by a standard Coupled map lattice (CML) model and the Zoomer model. In this post I show how a specific statistical-mechanical property of scale-free space use may reveal the difference between these two space use conditions despite an apparent similar level of spatial autocorrelation below the population’s carrying capacity.

First, a brief summary of the model conditions (for details, see Part I-II):


Why not including conspecific attraction also under the standard CML scenario? Because one of the assumptions for mean field population kinetics, represented by a CML model, is absence of spatial memory effects on redistribution beyond the unit scale. Hence, heighbourhood re-shuffling of individuals can be represented by a standard diffusion compliant process only (assuming that advection – another scale-specific process – is also limited to finer scales than the unit grid). Like it or not! I’ll return to this topic in a later post.

While non-autocorrelated population dispersion (exponential distribution of local population density, V ∝ M) is the typical pattern of a standard population scenario if a substantial part of the population is fluctuating close to the carrying capacity (see Part I in this series, example 1), a similar result is difficult or impossible to achieve under scale-free space use and conspecific attraction. 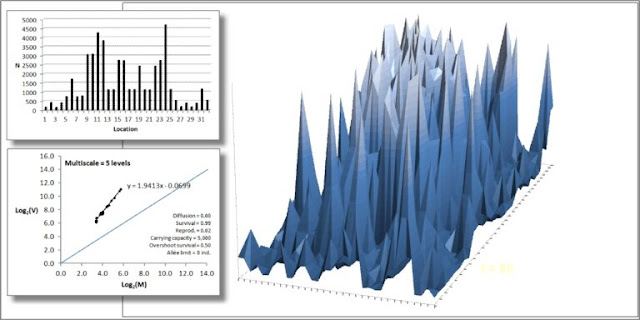 Spatial autocorrelation (V ∝ M2) is swiftly restored – typically within a few time increments – following instances where a larger than normal part of the local populations are crashing simultaneously. The example above shows a snapshot close to the carrying capacity* under condition of local overshoot crash rate of 50% (diffusion rate = 0%). A similar result appears even under a more dramatic local crash rate of 90% (not shown), which may be compared to the CML Example 1 in Part I.

Obviously, since standard and scale-free statistical mechanics for spatially extended populations are so fundamentally different i qualitative terms (for example, autocorrelation appears from different processes; growth/diffusion and intrinsically driven conspecific attraction, respectively), it should be a key goal to pinpoint statistical methods to distinguish between these two conditions for population dynamics.

Here I show for the first time how spatial autocorrelation of the population’s density surface, here to be studied from the log(M,V) pattern, may provide a simple method in this respect.

To pinpoint one of the hallmarks of scale-free population dynamics, consider these log(M,V) snapshots, where I have interpolated the regression lines towards the y-intercept [giving the parameter log(a) in log(V) = log(a) + b*logM].

First, for the sake of comparison, two examples from scale-specific dynamics: 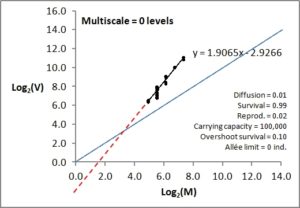 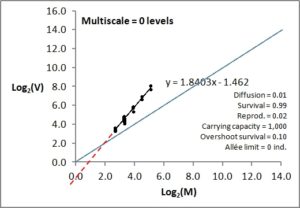 Then consider the scale-free kind of population kinetics: 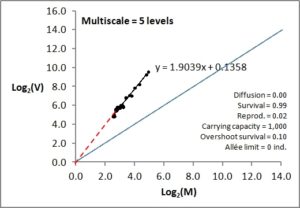 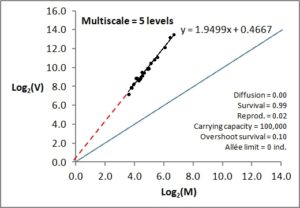 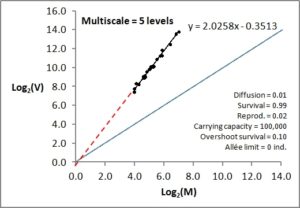 In the two first of these zoomer examples, diffusion rate = 0%, while in the third example diffusion is set to 1%. All other conditions are similar to the scale-specific scenaria above.

The key difference regards the y-intercept, log(a), which – under a premise of little influence from local carrying capacity at the time of the actual snapshot – is strongly negative for a scale-specific scenario and close to zero for the zoomer conditions. The magnitude of the negative intercept from scale-specific dynamics depends on the average M; more abundant populations (from the perspective of the chosen scale range) will show a “parallel shift” towards the right-hand side in the log(M,V) plot, and thus show an even more negative log(a).

To understand this difference between scale-specific and scale-free population kinetics, observe that the power exponent b ≈ 2 implies that √V; i.e., the standard deviation (SD), is proportional with M. Further, if log(a) = 0 (a ≈ 1) in addition to b ≈ 2 the coefficient of variation (CV) is approximately constant over the range of M (recall that number of individuals, M, is proportional with grid cell size, which is proportional with square root of scale, k);

Only the scale-free zoomer model condition produces results under condition of spatial autocorrelation in compliance with a constant coefficient of variation over the given scale range. The population is spatially self-similar; i.e., it satisfies a statistical fractal. In contrast, the classic CML model produces a “smooth” density surface (0 < CV << 1 ) at fine resolutions**.

Since the y-intercept under the Zoomer model scenaria approximates log(a) = 0, the CV≈1 condition is not sensitive to population abundance. In my book I describe other methods to study a population’s scaling properties under a premise of Multi-scaled random walk at the individual level, for example in the context of Taylor’s power law (search Archive). I also provide empirical support for scale-free population dispersion.

In upcoming posts in this series I will bring the analysis further, by studying the influence of spatial heterogeneity and respective models’ responses to perturbation events***.

*) As mentioned in Part I (see its Note), the carrying capacity is given a special interpretation as the threshold whereby the local individuals (within the finest defined grid scale) are moving out, redistributing themselves or dying.

**) Recall from previous posts (and my book) that the standard framework to model spatially extended population dynamics – Coupled map lattice models and partial differential equations – in fact depend on such a smooth density surface at fine spatial resolutions; i.e., in the (hypothetical) theoretical limit of infinite local population density. Otherwise the population is not differentiable! If this premise fails, the standard approaches are doomed to fail with respect to the model’s realism and predictive power.

***) I kindly ask you to give credit to my blog and my book when you refer to the statistical-mechanical theory for scale-free population dynamics! To my knowledge, for the moment these are the only sources for this qualitative departure from standard population dynamical modelling.
Statistical mechanics - populations Statistical properties of populations