Home Range as an Emergent Property

January 13, 2016
An animal is generally constraining its various activities within a limited range of the habitat, relative to what is potentially available to it during the actual period. However, the object we call a home range (HR) may be described by models that represent qualitatively different processes at a very fundamental level. These differences have consequences for statistical analysis and ecological inference. The differences also highlight an inherent paradox of the classic model, and makes one wonder how this approach has survived as a cornerstone of animal space use theory for so long.

A HR is generally and traditionally assumed to be the result of the animal’s tendency to turn back towards more central parts of the range when the distance from centre(s) of activity becomes too large. More specifically, a directional (centre-pointing) bias on direction of movement is assumed to become stronger the more distant the animal moves from the centre. This advection effect, in combination with the independent effect from a variable staying time in various intra-HR localities, will then generate a utilization distribution function that reflects (a) a generally lower intensity of space use towards the periphery of the home range and (b) locally varying space use intensity within the HR. 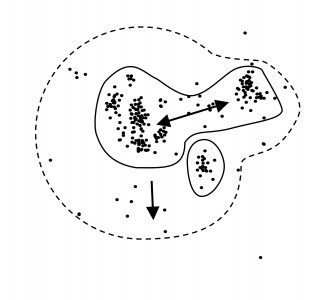 The HR object is thus traditionally described by an area demarcation and a utilization distribution, albeit acknowledging that the range has fuzzy borders and a heterogeneous internal “structure”. However, an increasing sample of relocations of the animal is on one hand assumed to allow for a better statistical approximation of the utilization distribution, and on the other hand a better estimate of the HR asymptote – the object’s area representation under the defined protocol.

In short, the classic HR model describes a convection process of space use. Convection is the combination of advective transport (the tendency to drift towards the HR centre) and diffusive transport (mechanistically modelled as a random walk). An important assumption for this classic model is that successive re-visits to a given intra-HR location are independent events. This follows – for example – from commonly applied statistical methods for habitat selection (e.g., use vs. availability), the assumption of a home range asymptote (a stationary space use, unless the HR is drifting), methods to test for serial non-autocorrelation (e.g., Schoener’s index), and preferred methods to estimate the utilization distribution (for example, the kernel density estimate). Details are provided in my book.

The classic model property that an animal’s path is assumed to self-cross by chance is a stronger conjecture than just relating it to verifying statistical independence of successive fixes in a series (serially non-auto-correlated relocations), since independent revisits to a given location regards the process that generates constrained space use. However, this assumption also brings up an inherent paradox of the classic HR model: how can area constraint appear in an open environment if revisits happen by chance?

I’m confident that many ecologists studying animal space use will agree that the classic convection model is not realistic. As an an alternative model framework for the HR process (containing the right-hand wall of the scaling cube, with four movement classes), consider that a HR is not a direct consequence of an external “field” of directional bias towards the home range’s centre. Instead the HR is in these four universality classes conjectured to appear as a side-effect from a tendency for occasional targeted revisits of some of previously visited locations. In other words, strategic returns lead to area constraint as a by-product. A given revisit event may – according to these four classes of movement – be ignited relatively independent of the animal’s current location. Consequently, the emergence of area constraint cannot be categorized as driven by a fixed bias (vector) field, which has a given strength and direction at a given point in space and time.

In this alternative scenario the HR becomes an emergent property from a tendency to remember previously visited locations (a memory map) and goal-driven occasional returns towards some of these locations. In two of these alternative classes of HR-related movement – the MRW model – there may even be a positive correlation between revisit frequency to a given site and the probability for future revisits to this site. In other words, the process is – under specific ecological conditions – driven by positive feedback (self-reinforcing space use). The individual advantage from site familiarity may be one such driver of positive feedback. We have previously called this space use property “auto-facititation” (Gautestad and Mysterud 2010).

In the illustration above – from Appendix A.3 in the book – 1,000 relocations from one specific model formulation – the Multi-scaled Random Walk (MRW) – are simulated and sampled at three temporal scales; covering high-frequency sampling (left) towards lower frequency sampling. Successive fixes along the sampled series are connected by lines. Despite the very different visual appearance of the three example ranges, they share a set of specific statistical signatures – they belong to the same universality class in statistical-mechanical terms. The three home ranges – illustrated by independently run series – here shows the transition from serially autocorrelated relocations towards non-autocorrelated relocations under this class.

In my book I describe how this and other classes of HR-related movement may be differentiated by simple statistical analyses of the series of relocations. These tests will reveal what kind of space use; for example whether the classic HR model, the MRW model, or another statistical-mechanical class, provides the most realistic representation of the process behind your GPS data series.