How to Demarcate and Visualize a Scale-Free Home Range?

January 29, 2018
The default method to visualize a home range in the MRW Simulator is to just present the spatial scatter of fixes, without a traditional area demarcation. The scatter then represents a statistical fractal with properties to be explored by various methods. However, some kind of area demarcation has at least a visual appeal and may also be a necessity for some analytical purposes despite its intrinsic sample size dependency. Here I present a home range portrait that is based on an objective criterion from the MRW theory, the Characteristic scale of space use (CSSU).

Using the CSSU scale [the unit spatial resolution when interpolating A(N,I) to (1,1); i.e., “area per square root of N”] and superimposing a square of this size onto each fix in the series of N fixes is in my view a feasible choice. This alternative presentation of a home range outline should be applied after CSSU has been properly estimated using the A(N) regression method (for example, see this post). The text field “pixel (intra-grain resolution)” in the MRW Simulator (search Archive) then contains the pixel scale that was found as the optimal CSSU scale for the actual data set. 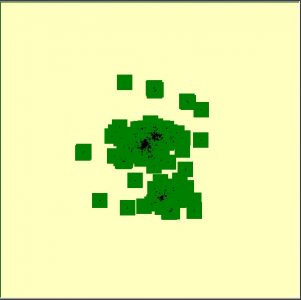 The aggregated pattern of squares at the CSSU scale represents the Multi-scaled random walk theory’s equivalence to the old paradigm’s home range size. While the classic theory predicts an area asymptote; which is the logical choice for any traditional home range area demarcator since they all depend on such an asymptote as a hidden assumption for the statistical methods, the alternative MRW theory does not predict such an asymptote. Since home range area is not stationary under the MRW theory while CSSU is, this scale is a feasible choice for space use presentation.

Since the aggregated area of the superimposed CSSU boxes is expected to expand in proportion to the square root of N, the aggregated CSSU area is not stationary (an emergent property of scale-free space use under influence of spatial memory). On the other hand, the CSSU itself – rather than home range area – is by default stationary. CSSU may thus may be applied to predict home range size for N=10, 100, 1000 or whatever realistic sample size within the given system’s intrinsic scale constraints, based on the unit scale area for N=1. However, the whereabouts of the added space with increasing N beyond the area revealed by the already available fixes is of course not predictable. Only the net area expansion from an expanded set is, in over-all terms.

The CSSU scale has a clear theoretical background, since it represents the objective balancing point – scale-wise – between “outward” area expansion and “inward” expansion of space use as a function of observation intensity (N).

The former leads to the expanding home range area (incidence, at the resolution of CSSU), while the latter regards how an increasing sample size is shifting the dilution effect on the statistical fractal towards finer spatial scales. Hence, inwards expansion takes place inside the green pixel boxes in the illustration above. See, for example, this post. In other words, larger N implies that the scatter of fixes becomes self-similar with a stable fractal dimension over a broader scale range, relative to the scatter from a small sample, and the CSSU scale stays put.

As shown in a previous post (search Archive: "CSSU: the alternative approach") post, CSSU can also be estimated from the box counting algorithm for the fractal dimension. In other words, there is a theoretical coherence between the A(I,N) regression and the A(k, I) method, where k is spatial resolution of the scale range that is applied under the box counting method.