January 03, 2018
Back in 1997 I started programming the foundation for a personal simulation environment for Multi-scaled random Walk, the MRW Simulator. Through countless updates since then the program has gradually matured into a version which finally is ready for limited distribution towards peers in the field of animal space use research.

The MRW Simulator is a Windows©-compliant tool to generate various classes of animal movement (self-produced data series) or to import existing data series. The generated or imported data – consisting of a sequence of (x,y) coordinates – may then be subject to various kinds of statistical protocols through simple menu clicks. The generated text files are then typically exported for detailed analyses and presentation of results in other applications, like the R package or Excel©.

The opening screen contains menus (1), a window where the simulated or imported set of fixes are displayed (2) and various command buttons, check boxes and information fields (3–14). 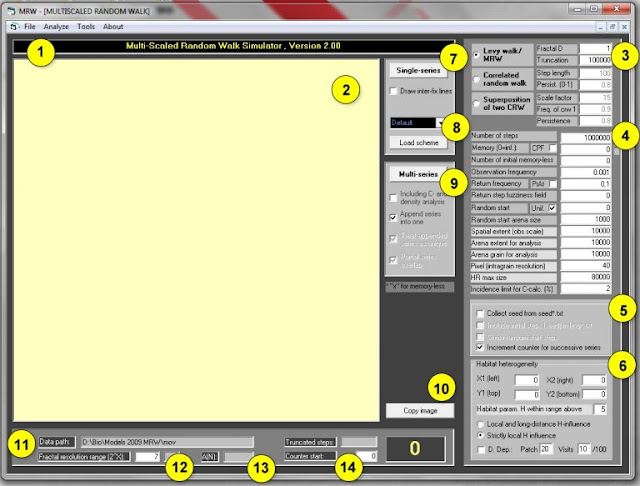 To get your first experience with the system, try out the most basic setting for a simulation. First, choose among classes of movement; Levy walk/MRW, Correlated random walk, and Composite random walk (superposition of two correlated random walks) (3). The difference between LW and MRW is explained below.

For your first test, choose Levy walk / MRW (3), with default setting for fractal dimension (D = 1) and maximum displacement length between successive steps (truncation = 1,000,000 length units). D = 1 simulates the condition where the animal on average utilizes its environment with similar scale-free weight at each intermediate scale from unit step length to maximum step (setting 1 < D <= 2 skews space use towards finer-scale space use on expense of coarser scales, again in average terms)

In a column of text fields (4) you may define conditions like series length, properties for the simulated path, size of the arena and grid resolution for the subsequent analysis. For example, the difference between Levy walk and MRW is given by setting a return frequency > 0 for MRW (implying targeted return events to previous locations at the chosen average frequency). For this first run, just keep the default values.

Later you will learn how to additionally modify the conditions by including a pre-defined series of coordinates (in a file called seed*.txt, where * regards an incremental number) (5). At this stage, just keep default settings.

By default the simulation runs in a homogeneous environment. The set of “Habitat heterogeneity” fields (6) allows defining the corners of a rectangle where the model animal behaves in a more “fine-grained” manner by reducing average movement speed. Other ecological aspects may also be defined, like a method to account for temporal and local resource exhaustion. As a start, just keep defaults.

Now, click the “Single-series” command button (7). You should see a number of fixes appearing as dots in the arena window. 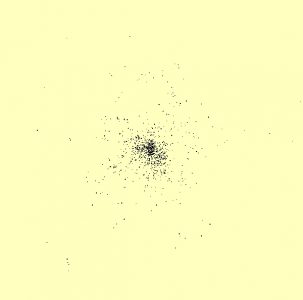 Before moving on to your first data analysis, observe that the simulation’s default settings are defined by “schemes”, which can be pre-loaded from a dropdown menu (8). You may also run a number of replicate simulations in an automated sequence (9). The arena may be copied to the clipboard (10) for subsequent pasting into other applications like a Word document, an Excel sheet, etc.

The “Data path” field (11) displays the folder where the system saves and retrieves data. By default, the data resides in a subfolder, “\mov”, under the location of the MRW simulator’s EXE file. This location is set during program setup.

The field “Fractal resolution range” (12) defines the scale range over which a subsequent analysis of the scatter of fixes – selected from the Analysis menu – will be performed by the so-called box counting method.

The field “A(N)” (13) shows the progress of another analysis, total area (incidence) as a function of sample size, N.

The MRW Simulator 2.0 will now be made available as an add-on tool for all buyers of my book. If you purchase it through my shopping cart at www.thescalingcube.com, you will get the program and its user guide bundled with the book.

In the next blog post*) I’ll show some of the menu procedures of the MRW Simulator, including how to import you own GPS space use series for analysis on-the-fly.
NOTE
*) http://www.animalspaceuse.net/2018/01/the-mrw-simulator-importing-your-own.html